A Si Sa Ket man who was believed dead and cremated in May has returned home very much alive, to his family's great astonishment, and is now seeking to correct the official record.

His step-brother Charoen Lekdi, a janitor at Ban Lao Fai School, said the family was totally astounded. They had been contacted in May by Nang Loeng police and asked to collect Mr Sakorn's body. Police said he had died of a digestive disease at a rented room in Phra Nakhon district on May 18.

The family went to pick up the body from the Faculty of Medicine Vajira Hospital of Navamindradhiraj University. They received a death certificate dated May 21, issued by Phra Nakhon district of Bangkok. 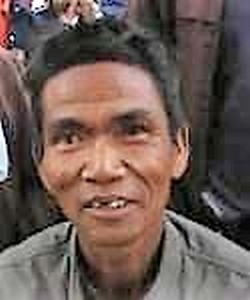 Nakornchai Pimklang, 33, a cousin, said family members asked to look at the body. He noticed the front teeth were different. His step-brother had two teeth missing.

He had pointed this out to an official, who suggested the family to just take the body, which was already swollen. The family took the body home and held religious rites for three days before the cremation. The bone relics were placed in a chedi at Wat Ban Lao Fai.

And then Mr Sakorn arrived home on Sunday evening. The family was shocked. The cousins kept touching him until certain he was not a ghost, he said.

The family informed village headman Veerasak Manthong, who had known Mr Sakorn for a long time. Mr Veerasak confirmed it was the real Mr Sakorn who had showed up at the house.

Mr Sakorn said he had been working on a fishing boat based in Nakhon Si Thammarat since Jan 24, 2016. During that time a Myanmar worker had stolen his identification card and fled. He reported the missing card and had been issued a new one at Khanom district office in the southern province.

He had now left the job and had returned home, only to find his family thought him long dead and cremated.

Mr Sakorn now wants the official record changed, because it still shows he died on May 18.

Mr Veerasak said he would take Mr Sakorn to the district chief, so the necessary steps could be take.

It is not known who was cremated in his stead.