'Dead' man walking applies to get his identity back
Thailand
General

'Dead' man walking applies to get his identity back

Sakorn Sacheewa provides information to officials at the Non Khun district office in Si Sa Ket on Wednesday, as he applies to reactivate his status as living, after being offically declared dead in May. (Photo by Sermpong Thongsamrit)

SI SA KET: A man who was believed dead and cremated has begun the process of getting his identity back, as police wonder who was the man using his name who died seven months ago.

Sakorn Sacheewa went to the Non Khun district office on Wednesday to ask that he be officially  resurrected and his name returned to him.

The Phra Nakhon district office issued Mr Sakorn's death certificate to his family on May 21.

The Bureau of Registration Administration, part of the Interior Ministry, subsequently declared him officially dead, based on the death certificate.

Non Khun district chief Pornchai Wongngam said officials will question his family, relatives and other people before submitting Mr Sakron's request to be officially declared still alive to the bureau.

Nang Loeng police in Bangkok had informed his family he died of a digestive disease in Phra Nakhon district on May 18. The body was sent to the  Faculty of Medicine, Vajira Hospital at Navamindradhiraj University, and his family took it back to Ban Lao Fai Non Khun, where it was later cremated.

But Mr Sakorn surprisingly showed up unannounced at his home on Sunday to the great shock of his family and relatives, who initially believed he was a ghost until reassured of his continuing existence in this world after repeatedly touching him.

Mr Sakorn said on Sunday that he had lost contact with them because he was out at sea, working on a fishing trawler operating out of Nakhon Si Thammarat.

He said a Myanmar man had stolen his ID card and he received a new one after reporting it to officials.

The problem now is: who was the man using his identity that Mr Sakorn's family cremated.

Pol Lt Weerayut Srisupat, deputy superintendent of Nang Loeng, said police had found Mr Sakorn's ID card along with a security guard's ID card with his name on it, in the rented room where he was believed to have died on May 18.

Police on Tuesday contacted the company and told that a man named Sakorn Sacheewa had worked for the firm since 2015.

Pol Lt Weerayut said police will try to identity the man once believed to be Mr Sakorn from the bone relics left from the cremation, and fingerprints. 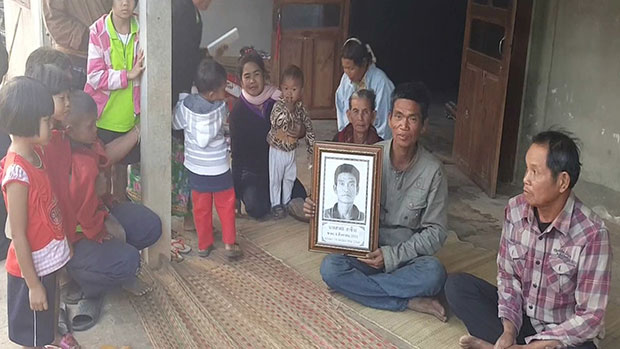 An alive Sakorn Sacheewa, surrounded by family and relatives, shows the photo of him they used during his cremation ceremony  back in May. (Photo by Sermpong Thongsamrit)