Construction of the first small stretch of the Thai-Chinese high-speed railway has begun with the official launch of the project on Thursday.

It is for only 3.5 kilometres of track between Klang Dong and Pang Asok, two existing train stations, in Pak Ching district, supervised by engineers from China.

Mor Lak Hin is where King Rama V observed construction of the first railway from Bangkok to Nakhon Ratchasima on Dec 21, 1868.

The Thai-Chinese project underscores the government's policy to improve transport infrastructure in the country and link it with other countries in Southeast Asia, the prime minister said.

Building of the short track comes after a long delay after Gen Prayut signed a memorandum of understanding on the project with Chinese Premier Li Keqiang in Bangkok in December 2014. (continues below) 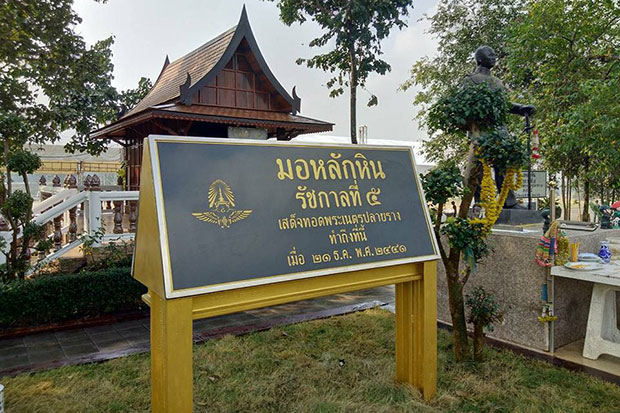 Mor Lak Hin is where King Rama V  observed the construction of the railway from Bangkok to Nakhon Ratchasima on Dec 21, 1868. (Photo from @pr.railway Facebook account)

Thailand and China will build the high-speed train line from Bangkok to Nakhon Ratchasima, a distance of  252 kilometres with six stations along the way.

The first phase is for only 3.5km between Klang Dong and Pang Asok.

The route is expected to open for service in 2022. Once completed, the train will travel at up to 250kph and take 90 minutes for the journey between the capital and Nakhon Ratchasima.

Wang Xiaotao, the vice chairman of the Chinese National Development and ReformCommission, represented China at the ceremony.