An arrest warrant has been issued for rock star Sek Loso for firing several gunshots into the air and the ground in front of the statue of King Taksin the Great at a temple in Nakhon Si Thammarat.

Video clips show Seksan Sookpimay (the star's real name) firing a gun at 1am on Friday in the compound of Wat Khao Khun Phanom in Phrommakhiri district of the southern province, said Pol Col Kritsana Pattanacharoen, a deputy spokesman for the Royal Thai Police.

The incident took place a few hours after Sek's band, Loso, had performed a charity concert nearby on Thursday night. The province on the same night was holding a celebration to mark the 250th anniversary of the establishment of Thon Buri as the capital of Siam by the late king.

Sek was shown firing nine shots into the sky and one into the ground near the statue of King Taksin. The noise frightened some local residents and they called the Phrommakhiri police, who questioned several witnesses and examined other evidence.

Pol Lt Col Pirom Ruangrung, deputy investigation chief at the Phrommakhiri station, on Saturday filed a formal complaint against Sek. The Nakhon Si Thammarat provincial court later in the day approved a warrant for Sek's arrest for illegal possession of a firearm, carrying it and firing it in a public area, said Pol Col Kritsana.

“He will be brought to justice,’’ said the spokesman.

Pol Maj Gen Wanchai Ekpornpit, chief of the Nakhon Si Thammarat police, said all stations would coordinate efforts to bring the rock star in, no matter where he is found.

It was not immediately clear why Sek, 43, was carrying a gun. The rocker for years has been a fixture in the gossip columns because of his fiery behaviour and a protracted and bitter divorce. He recently received a suspended jail sentence for assaulting a former aide to his ex-wife.

Despite high costs and strict -- at least on paper -- vetting and registration procedures, Thailand has an unusually large number of guns in private hands. Firing shots on celebratory occasions such as New Year is not unheard of. 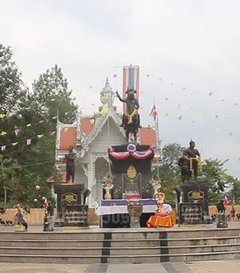 Sek took to Facebook on Friday to defend his actions.

“On that night, there was a worshipping ceremony to mark the 250th anniversary of King Taksin the Great’s enthronement," he wrote. "If I did anything wrong, how could I dare sit and take a photo with the abbot of Wat Khun Phanom and Nakhon Si Thammarat people?

"If I had done something wrong, I might have been strangled to death by the spirits. You have brains. Think about it. Try to think about it from several angles. Don’t keep criticising me.’’

Sek posted an update on Facebook on Saturday, displaying Line messages sent to him by the abbot of the temple, who had explained to police that the shots were fired to pay tribute to the late king.

Relations between Sek and his ex-wife Wiphakorn have improved in the past year or so, though there is no reconciliation on the cards. She took to Facebook on Saturday with a message of support and a photo of herself with the rocker and their three children in happier times.

“Dad ... return home and take a rest for a while," wrote Wiphakorn, also known as Karn. "Put a brake on the work and let us take care of you. Don’t worry or be concerned about anyone. You still have value. We will not leave you alone.’’

Her message drew mixed reactions from her Facebook friends.

Sek is currently romantically involved with a former Maxim model, and he recently became a father again, this time to a baby born to a previous girlfriend. 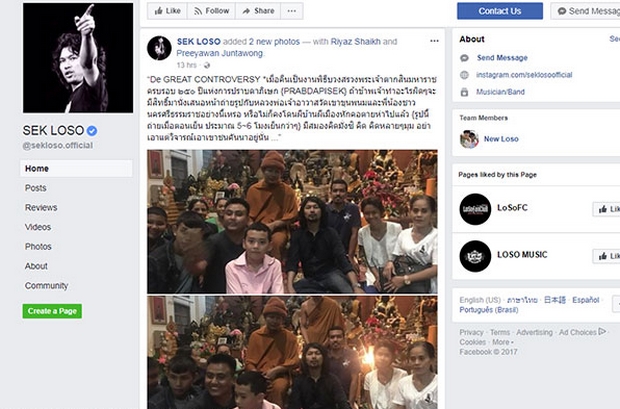 Sek Loso has defended his boisterous behaviour in Nakhon Si Thammarat. "If I had done something wrong, I might have been strangled to death by the spirits," he wrote. (Photo from Sek Loso official Facebook page)