Sek Loso back in custody as gun incident probe widens

Rock star Sek Loso won bail on Monday from the Min Buri court after he was charged with illegally discharging his handgun, and resisting arrest. (Post Today photo)

Rock star Sek Loso was in police custody again Monday night despite having obtained bail in Bangkok, after Nakhon Si Thammarat officers came to pick him up to face charges in the southern province.

Both matters relate to a gunshot incident which began in the South on Friday and culminated in him allegedly resisting arrest in Bangkok on Sunday night.

The Min Buri Provincial Court on Monday granted 150,000-baht bail to the rocker, who was arrested on Sunday on a a charge of illegal possession of a handgun, after creating public panic by firing shots into the sky at night in Nakhon Si Thammarat on Friday.

During the arrest at his home, which was attended by deputy police chief Chalermkiat Sriworakhan, the 44-year-old rock star (real name Seksan Sookpimai) resisted officers, threatening to shoot them if they tried to enter his locked bedroom while he filmed the exchange on Facebook live. They broke the door down and detained him and, as a result, he now faces charges of obstruction of officers doing their duty.

Kannayao police in Bangkok on Monday took him to court, asking to keep him in prison for the first 12-day legal round of detention as questioning continues. Police intend to interrogate seven witnesses and obtain more information on the singer's criminal record, and the history of the weapon.

Police told the court that on Sunday police raided his house in Sukhaphiban 5, Bangkok under an arrest warrant issued by the Nakhon Si Thammarat Court. Officers found the handgun in his room. Two gunshots were fired by police in his house before he was arrested. 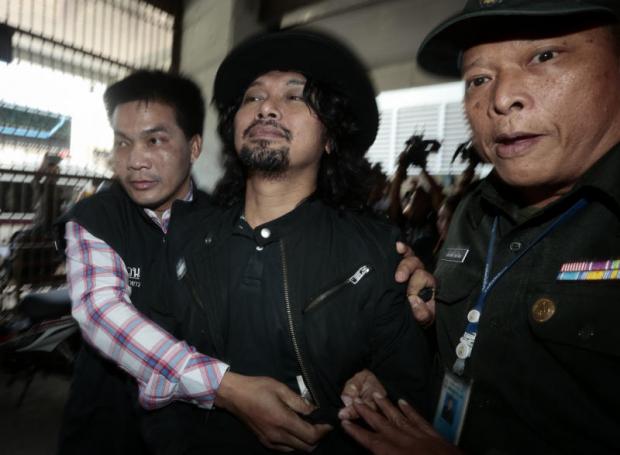 An initial test also found drugs in his urine, which he claimed was traces of a sleeping pill he had taken. As soon as he obtained bail, police from Nakhon Si Thammarat province arrested him as they probe further what happened at the temple on Friday when he fired the handgun into the air.

Sek Loso on Monday said "Happy New Year" and apologised to his fans, before being transferred to the southern province.

The Nakhon Si Thammarat Court charged him with carrying a gun in public illegally, and firing a gun in a public area.

Sek Loso said he fired the gun in front of the statue of King Taksin to honour the king at Wat Khao Khun Phanom in Phrommakhiri district.