Sek Loso gestures to fans after police took him to Wat Khao Khun Phanom in Phrommakhiri district in Nakhon Si Thammarat, where he played a concert - and then fired gunshots - on Friday night. (Photo by Nujree Raekrun)

Police will press a drug charge on Sek Loso after substances were found in his urine. The popular rock star is detained in Nakhon Si Thammarat after allegedly firing gunshots in public following a concert on Friday.

Metropolitan Police Bureau chief Pol Lt Gen Chanthep Sesavech said on Wednesday the Institute of Forensic Science had conducted a urine test on Sek Loso. The test resulted in a purple colour -- an indication the rocker had traces of methamphetamine in his body.

Methamphetamine is listed in the most serious category of illegal substances under Thai law.

“The investigation team from the Kanna Yao Police Station will proceed in charging him for illegal substance abuse. Although he (Sek Loso) has previously been charged with the same offence and given rehabilitation, it is irrelevant to the recent incident,” Pol Lt Gen Chanthep said.

Kannayao police chief Pol Col Sing Singhadej said the musician will be summonsed to hear the drug charge at the Kannayao police station after being freed on bail in Nakhon Si Thammarat.

The rocker's latest run-in with the law began when he fired shots from a handgun in front of the statue of King Taksin the Great at Wat Khao Khun Phanom in Phrommakhiri district, shortly after playing a concert there.

He told police he fired the shots to pay respects to King Taksin. 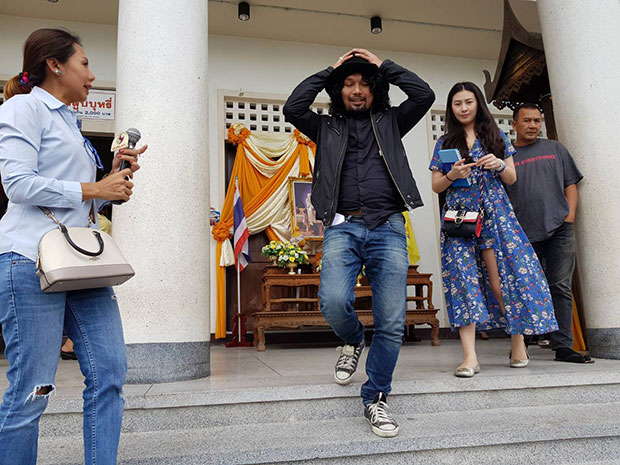 Sek Loso leaves the Nakhon Si Thammarat Court after he was granted bail on Wednesday. (Photo by Nujaree Raekrun)

Deputy Phrommakhiri police chief Pol Col Pirom Ruengrung said Sek had admitted to possessing an unauthorised firearm and firing shots in a public place. But the rocker denied an accusation that the pistol was obtained illegally.

After firing the shots, Sek returned to Bangkok. He was arrested on Sunday at his house in Kannayao district under a warrant issued by the Nakhon Si Thammarat Court.

Police conducted a urine test after arresting him. The initial test result was positive but Sek claimed that it was due to sleeping pills. Police then sent the sample for further testing at the Police General Hospital.

After being returned to Nakhon Si Thammarat, Phrommakhiri police took the rocker to the court on Wednesday to request his detention. The court then released him on 150,000 baht bail, with the condition that he not leave the country.

Sek underwent drug rehabilitation in 2012 and vowed to stay off drugs after going through the programme.