The removal of the royal crematorium began at Sanam Luang on Thursday afternoon and will take about 60 days. Parts of the structure and surrounding buildings and sculptures will be exhibited.

The process began with merit-making activities and religious ceremonies and the removal of the Nine-Tiered Great White Umbrella of State on the top of the crematorium.

Culture Minister Vira Rojpojchanarat said the dismantling would take about 60 days and the Bangkok Metropolitan Administration would then renovate the Sanam Luang ground.

The nine-tiered umbrella will be kept at the Royal Ceremonial Affairs Division of the Bureau of the Royal Household in the Grand Palace. Some steel structures and architectural parts of the crematorium will be moved to the Ayutthaya Historical Park in Ayutthaya province.

Pavilions and sculptures of mythical creatures will be put on display at a museum of the royal cremation in Pathum Thani province and the Office of Traditional Arts in Nakhon Pathom province.

Exhibits on the life and work of King Bhumibol Adulyadej and other exhibits will be put on display at the Phaya Thai Palace in Bangkok, King Rama IX Archive in Pathum Thani, the National Library and the Office of Traditional Arts. 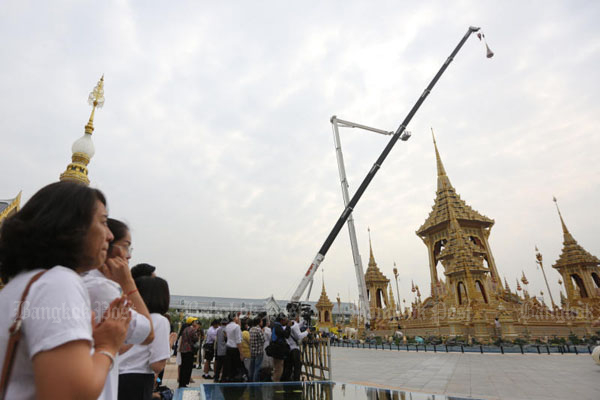