Tip of the iceberg
Thailand
General

Tip of the iceberg

Myanmar's government and entirely out-of-touch military soiled themselves again, over the Rohingya issue of course.

Once again the words "genocide" and "Myanmar" were uttered together, over the sounds of whitewashing by these unapologetic enemies of compassion and human rights.

Entirely unsurprisingly, the army turned a moment of potential mini-redemption into just another justification for murder, bigotry and ethnic cleansing.

The tatmadaw's commander Snr Gen Min Aung Hlaing stated on his official "True News Information Team" Facebook site that an army unit had massacred and buried 10 Rohingya men. The troops and some villagers who egged them on were under arrest. 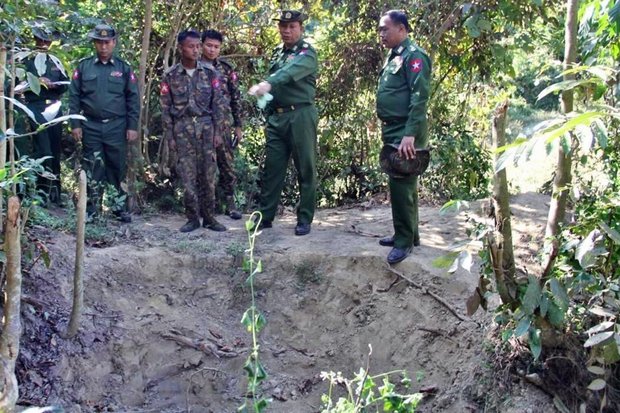 Officers of the tatmadaw, the Myanmar Armed Forces, inspect the mass grave where troops and allegedly some villagers killed and then buried 10 Rohingya men in a mass grave. (Photo via Myanmar army's True News Information Team)

Then, naturally, he blew it by noting that actually the dead men had caused the atrocity. "This incident happened because ethnic Buddhist villagers were threatened and provoked by the terrorists." Ah yes, the terrorists -- the unarmed village residents, now dead, who forced the soldiers to kill them.

During this unique moment of semi-truth by the tatmadaw commander, two Reuters journalists went on trial in Yangon for treason. The actual crime of reporters Wa Lone and Kyaw Soe Oo was that they had discovered the Inn Din village massacre and were just about to report it to the world, when the army caught them in the act of practising journalism.

They're in jail and likely to get long prison sentences for treason -- reporting exactly what Snr Gen Min Aung Hlaing reported. This is not a properly functioning country, let alone one whose extremely absent "leader" used to claim was a developing democracy.

And the problem is that the Inn Din butchery and its lamentable fallout against logic and the press is just a tiny reveal. As Amnesty International's Southeast Asia point man James Gomez put it, not entirely originally, it "is only the tip of the iceberg" of known and as-yet unknown atrocities and war crimes.

Elected leader Aung San Suu Kyi and her government have acquiesced in the tatmadaw's ethnic cleansing of the Rohingya. Above, the startling expansion of refugee camps in Bangladesh after the army started a campaign of razing villages and killing Rohingya in late August of last year. (Satellite photos via Reuters)

Now. About those terrorists.

A couple of years ago, a Rohingya expat in Saudi Arabia formed Arsa -- the Arakan Rohingya Salvation Army. Last Aug 25, Arsa members launched a one-night series of coordinated attacks on army and police posts. On Dec 16, the group weirdly called on Rohingya to join al-Qaeda to fight for an independent, Islamic state of Arakan.

This has provided the Myanmar government and army with what both said were license to launch mass murder and ethnic cleansing of the Rohingya.

This claim is not just uncivilised, but indefensible. A neighbouring country, let's call it "T-land", has dealt for decades with many such gangs as Arsa and literally thousands of such attacks. So have many other countries.

But Myanmar, from the top leaders to courts and journalists and way to many of the clergy, have called on their fantastical visions of ridding the nation of all Rohingya and Muslims. Ethnic cleansing achieved, genocide is under way or on the menu, depending on how you view Myanmar and its leadership vacuum.

It's worth mentioning here that in addition to the country's notably absent leader pretending to be busy elsewhere (intimidating Pope Francis, say), allegedly intelligent voices have gleefully and willingly taken up the racist, violent rhetoric of the army and the world's least Buddhist monks.

A chief violator of decency is the once splendid Irrawaddy magazine, now a website. Their outright encouragement of the Myanmar government's hate policies against Rohingya, and Muslims in general, makes the Irrawaddy look like a North Korean Channel 1 news reader announcing another successful hydrogen bomb test.

Current example is the Irrawaddy's headline on the army's admission of the mass murder and cover-up at Inn Din: "Security Officials, Villagers Executed 10 Arsa-Linked Rohingya".

The story's lead paragraph then explained that the dead men were not just "Arsa-linked" but were actual "Muslim militants who launched a series of attacks" on Aug 25, and who teed up this murderous rampage by the army that's still going on five months later. Even the army's statement didn't go that far to justify the murders.

The foreign media are automatic villains. The Myanmar army-government-court cabal serves far too many people as saviour of the Myanmar purity from the contagion of Rohingya and their foreign defenders and enablers. So reporters who work for Reuters and Turkish TV are unpatriotic traitors ipso facto. 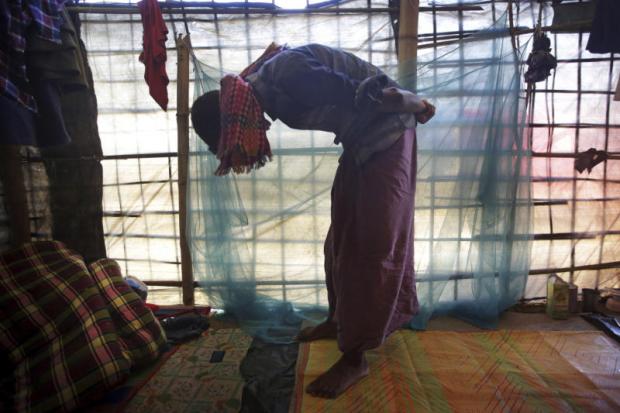 GRIM FATE: A Rohingya refugee re-enacts what he says was an execution of his fellow villagers in Rakhine by Myanmar soldiers.

In Thailand, "Are you Thai?" is revealed and rejected bigotry. In Myanmar, "Are you Burmese?" is patriotism.

The trouble with Myanmar is as ingrained as it is uncivilised. The army, with complete acquiescence of the elected government, owns a licence from the media and currently dominant Buddhist clergy. The licence authorises the three Rs of Myanmar -- razing, rousting and rape. And the tatmadaw is a world leader in all three.