Hunt for killers of wild elephant

Veterinarians and park officials on Saturday conduct an autopsy on a male wild elephant shot to death in Kui Buri district in Prachuap Khiri Khan. (Photo by Chaiwat Satyaem)

PRACHUAP KHIRI KHAN: Police are hunting down the gunmen who brutally killed a wild elephant in a national park in Kui Buri district.

Provincial police chief Pol Maj Gen Pattana Petsayanawin on Monday set up three teams of investigators to collect information and look for clues in their manhunt for the killers of the 20-year-old beast. Soldiers are joining the police in a combined effort to hunt down the perpetrators. 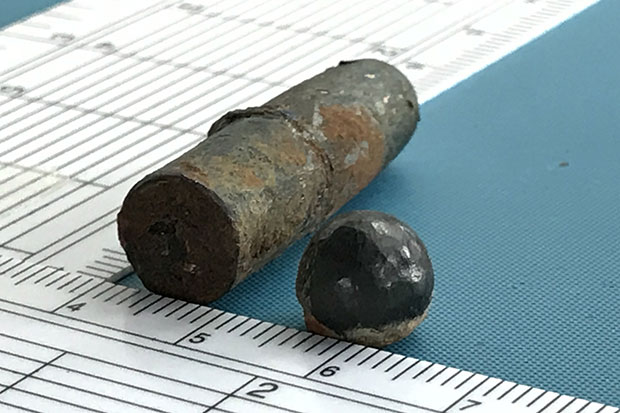 Bullets found in the body of the dead elephant. (Photo by Chaiwat Satyaem)

The male elephant was found dead in the Kui Buri National Park on Friday. A preliminary autopsy by veterinarians from the National Park, Wildlife and Plant Conservation Department found a rifle bullet and a shotgun bullet in the body.

Police said they will examine firearm registrations in Kui Buri, Muang and Samroi Yot districts as part of their investigation.

Plantations in areas adjacent to the national park have occasionally been raided by hungry wild elephants. Investigation chief Pol Col Chana Suwannakomol said angry farmers might be to blame for the death.

Srisawad Boonma, the kamnan of tambon Haad Kham where the elephant's body was found, said local residents had learned how to coexist with wild animals. The problem could come from outsiders who entered the area, he suggested. 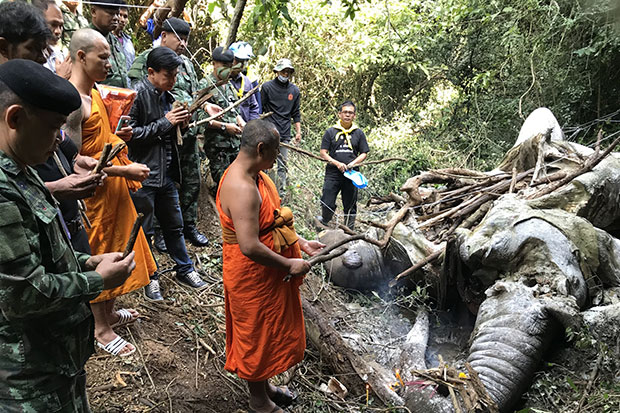 Monks perform a ceremony to cremate the wild elephant on Sunday. (Photo by Chaiwat Satyaem)

The park has filed a complaint with the Haad Kham police station on the death of the elephant. Officials removed its tusks and took them to the Kui Buri park office.

Monks from Wat Rai Bon held a religious ceremony on Sunday before the animal was cremated in the forest.

"I pray that people and authorities will help conserve elephants in Kui Buri. It was sad to see an elephant, our national symbol, killed," abbot Phra Khru Dhammavipak said.