A Pakistani suspect has been arrested for allegedly producing fake passports for transnational criminals, possibly including those joining Isis, according to a source. 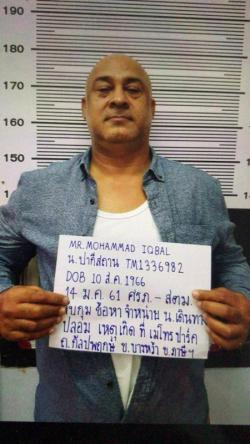 The source, who asked not to be named, said immigration staff, police and the army arrested a Pakistani identified as Muhammad Iqbal, 51, on Sunday at the Metro Condominium in Phasi Charoen district of Bangkok.

Mr Iqbal was charged with trading in counterfeit documents and is being held by authorities at an undisclosed location while the investigation continues, the source said.

The arrest was made as a result of an extended probe which began after authorities in February 2016 arrested Iranian national Hamid Reza Jafary, known as "Doctor", at a secluded house in Chachoengsao province.

Immigration police said at that time the gang made bogus passports and supplied them to a network of people from Middle Eastern countries to be used for travel to Europe and Australia.

Mr Iqbal is in the same network as Mr Jafary along with many other Pakistani criminals who have been linked with counterfeiting documents to supply to Isis, the source said.

Thai authorities are investigating with the help of Malaysian authorities if Mr Iqbal was also involved in making fake passports in 2016 and 2017 for militants from Malaysia, Indonesia, Singapore and possibly Thailand who wanted to travel to join the Isis terror group in the Middle East, the source said.

The government has always maintained Isis has not been active in any form inside the country.

The operation was aimed at cracking down on migrants who entered the country illegally, especially those working illegally and human traffickers.

The Daily News reported that immigrants from neighbouring countries have been working in protected jobs or running their own businesses by hiring Thai nationals as proxies to pretend to be business owners in many provinces including Chon Buri. A police source, who asked not to be named, said brokers or those who gave them accommodation would also have to face legal action.

The police denied reports of negligence and taking bribes.

Director-general of the Department of Employment, Anurak Tossarat said, "We have to make sure that they [migrants] do not affect job opportunities for Thai citizens."

He added street vending, hairdressing and tour guiding were among the careers set aside for Thais, where foreign competition is not allowed.