Smoking ban at 24 beaches in force from Thursday
Thailand
General

Smoking ban at 24 beaches in force from Thursday

Officials launch a smoking-banned awareness campaign on Hua Hin beach in Prachuap Khiri Khan, where it comes into force on Thursday. (Photo by Chaiwat Satyaem)

When the clock ticks into Thursday, 24 beaches in 15 provinces will be declared no-smoking zones, with hefty penalties for violators.

The smoking ban includes popular Cha-am beach in Phetchaburi, Hua Hin and Khao Ta Kieb in Prachuap Khiri Khan, and Dong Tarn in Pattaya, and will be strictly enforced from Feb 1 under the regulations of the Department of Marine and Coastal Resources. (continues below) 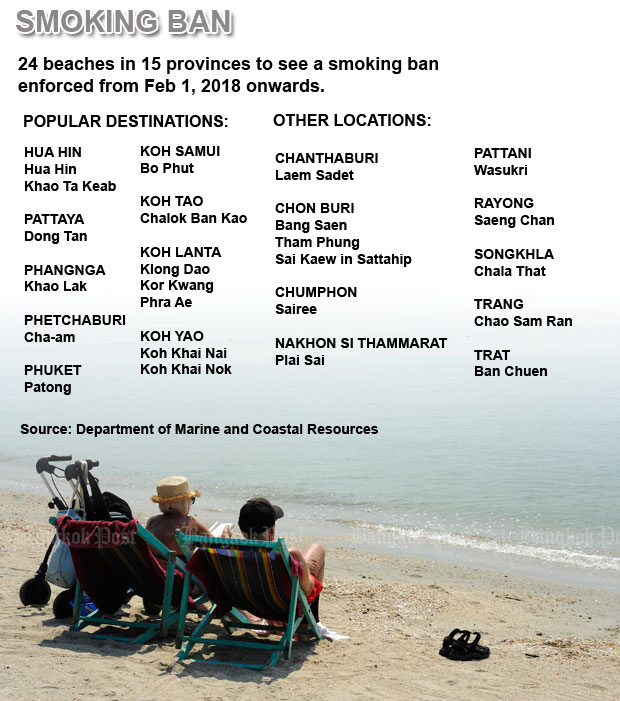 The 15 beaches are the first selected for enforcement in an attempt to keep them clean and ensure non-smokers can enjoy the fresh air. More beaches are expected to be added to the list in the future.

Phetchaburi deputy governor Natthawut Phetpromsorn said on Wednesday he hoped Chao Sam Ran beach in Muang district would be on the next list.

The smoking ban regulation was published in the Royal Gazette on Nov 2 last year, and is effective from 12.01am Thursday. It was introduced after close examination revealed untold thousands of cigarette butts  in the sand at test beaches.

Chala That beach in Songkla was the most littered, with 1770,000 cigarette butts found in the tested area of sand, according to the department.

Smoking areas have been designated for smokers behind the 24 beaches, but smokers can no longer puff away anywhere at will. Violators face fines of up to 100,000 baht and/or a year in prison.

"Any smokers walking onto those beaches will have to put it out first. Smoking is strictly prohibited on the beaches," said Bannarak Sermthong, director of the Region 4 Marine and Coastal Resources Office.

Hua Hin mayor Nopporn Wutthikul said the ban will make the beach clean and reduce pollution in the sea. Smoking areas with ash trays have been prepared for smokers, he added.

Officials in provinces where beaches are popular destinations for tourists - such as Cha-am district in Phetchaburi and Hua Hin district in Prachuap Khiri Khan - have launched campaigns make visitors aware of the ban.

In Cha-am, a pamphlet printed in Thai, Chinese and English is being handed out to visitors.

Officials are seeking cooperation from shops and people renting out deck chairs in warning customers about the ban and advise them to go the smoking areas if they really cannot go without it.