'If they don't want me, I'll leave'
Thailand
Politics

Deputy Prime Minister Prawit Wongsuwon gets a thumbs-up from several supporters at an event pushing national reconciliation. The backdrop of standing people is a poster. (Twitter/@wassanananuam)

Deputy Prime Minister Prawit Wongsuwon said Wednesday he would quit if that is the public's wish but also defended his track record over the last half a century as both a military man and a holder of public office.

"I've served in the public sector since 1968. It's now been 50 years and there have not been any serious issues," Gen Prawit, who also serves also defence minister, told reporters at the Defence Ministry.

"Have you ever seen any damage I made to this country? I'm here because I want to work for the country. If the people don't want me, I'm ready to leave," he said at a meeting attended by leaders of the three armed forces.

Gen Prawit is under pressure due to a collection of luxury watches that were not declared among his assets to the National Anti-Corruption Commission (NACC).

The video of his appeal is below, in Thai.

A total of 25 timepieces worth 39.5 million baht have been spotted on Gen Prawit's wrist in photos that appeared on the popular CSI-LA Facebook page. He claimed they all belonged to friends and have since been returned.

When the scandal intensified in the middle of January, Gen Prawit said he would resign if the NACC found him to be guilty of wrongdoing.

Gen Prawit did not say if his decision to stay would be influenced by opinion polling, including one poll withheld by the National Institute of Development Administration (Nida) which is said to show few people believe his explanation that he borrowed the luxury timepieces. 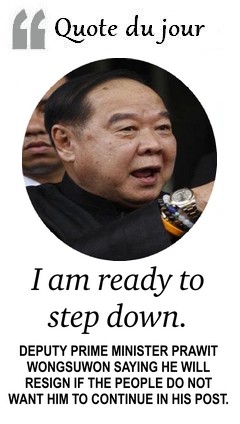 The prime minister has denied telling Nida to withhold the poll, though the decision prompted the poll director, Arnond Sakworawich, to quit, saying he opposes self-censorship even more than he does political interference.

The deputy premier told Wednesday's meeting the Defence Ministry has worked in support of the government for the last three years and eight months to maintain law and order and resolve conflicts.

He said the ministry did its job with honesty and integrity to maintain national security and foster unity despite a series of challenges, adding that its efforts were generally supported by the media.

Others have accused the government of falling short, he added.

"There have been difficulties and friction. There is one group trying to accuse the government of failing its job and failing the people."

He said the armed forces remain a key mechanism to serve society and foster peace and they must communicate clearly with the public about the government's work.

He said Gen Prayut would not contest the next general election, which was scheduled for November but now looks likely to be delayed until at least February.

Meanwhile, members of a panel investigating Gen Prawit's luxury watch collection reportedly visited the friend he identified as the true owner of the luxury watches and found he had over 100 in his collection.

Also on Wednesday, Jirayu Huangsap, acting deputy spokesman for the Pheu Thai Party, called on the NACC to keep the public regularly updated on the results of its investigation to help restore confidence in the regime.

He also criticised Gen Prayut for lack of progress in terms of reform and said the country's position on the Corruption Perception Index may slide. The report is due out this month.

In another development, army chief Chalermchai Sitthisad said he has ordered security forces to avoid confrontations when enforcing the law.

When asked if certain groups were pulling the strings behind recent protests, the army chief said the authorities are looking into those activities.

Asked about calls for the military to distance itself from the National Council for Peace and Order (NCPO), he said the military may be called to act in certain circumstances such as a national crisis.

He said the current situation was not a national crisis when asked if that meant another coup could be on the cards.

Gen Chalermchai also urged patience given that some of the government's policies to resolve societal problems will take time to bear fruit.