Making ends meet: Pork vendor Somporn Luijiew, who was seriously injured in the bombing, says she is worried about safety and dwindling customers.

Thirteen days have passed since the motorcycle blast at Pimolchai fresh market in Yala's Muang district. But 54-year-old pork vendor Somporn Luijiew, who sustained serious injuries when the bomb exploded, still fears for her safety and security.

The most seriously injured survivor of the Jan 22 bombing relived the events of a moment she describes as the "most fearful experience of my life".

The motorcycle bomb killed three people and wounded 34 others, all civilians.

"I have never experienced anything like this before. The motorcycle bomb exploded very near my pork stall. I was chopping up pork ribs behind the stall, ready for customers to buy when the bombing took place.

"I heard the sound of a loud explosion and then saw the thick black clouds of smoke swirling and spreading fast across the shops and stalls near the blast site. As soon as I realised it was a bomb, I ran away from my stall without knowing why my clothing had become soaked with blood,'' Ms Somporn said.

She said that she ran away to the main street and felt like she was going to pass out. Shortly after that somebody came and helped take her to nearby Yala Hospital. There, she felt a stinging sensation in her upper arm that soon became very painful.

She later found out that a piece of shrapnel from the bomb had penetrated her left shoulder.

Ms Somporn said she was taken straight into the operating theatre for the shrapnel to be removed. She was left with a large and deep wound which needed a significant amount of medical care to prevent infection.

The doctor said she needed close supervision and ordered her to stay at the hospital for seven days until the wound had started to heal properly.

However, even after she had been released from hospital, the doctor asked her to see him once a week to check on her progress, she said. 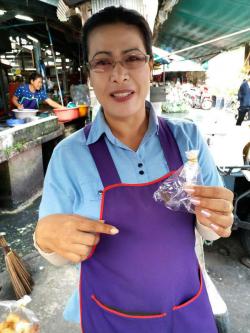 Ms Somporn said her shoulder is still painful and stiff and the full range of movement has yet to return.

She said she has also suffered from issues with her hearing due to the deafening nature of the blast. The constant ringing in her ears still makes it difficult for her to fall asleep.

After her discharge from the hospital a couple of days ago, Ms Somporn said she returned to her pork stall at the market, but several things have changed.

She says two of her friends, who she used to talk to almost every day for 30 years, are no longer there as they were among the three fatalities that day. The other bystander killed was a male customer.

"I feel that other vendors at the market still have fears for their safety. But they don't know what to do.

"We can't stay at home and stop doing our jobs. Everybody has to make ends meet. This market is my office and I have been here since I was 18 years old,'' she said, adding that vendors here had held talks about possible surveillance measures they could take to prevent future bombings and had also agreed to notify law enforcement if they saw anything unusual in the market.

In addition, she said that since the bomb, the number of customers had dwindled, and that even regulars had been put off from visiting her stall.

Other vendors' businesses have also been severely affected, she said.

They have collectively asked the state to help to revive the market as quickly as possible as many stall holders are facing the prospect of being forced out of business and having to leave the market altogether, Ms Somporn said.

Ms Somporn said she is also worried many customers will not come to the market to celebrate the upcoming Chinese New Year on Feb 16.

Sopa Chantakul, a 48-year-old dessert vendor at the market, who witnessed the incident, said she had been lucky to have been narrowly missed by a piece of flying shrapnel.

"It hit the wall and fell to the ground near where I was standing,'' Ms Sopa said, showing the piece of bombing shrapnel which she had kept as a memento of her good fortune.

"Had it been just a few inches to the left, where my head was, I would be dead now."

Ms Sopa said that she and her family have been selling desserts and sweets at the market for 30 years but this was her first experience of such an attack.

"It's very scary and, unlike in the movies, it's happening for real,'' she said.

Ms Sopa recalled that shortly after the bombing, many soldiers combed the area with sniffer dogs to make sure there were no further devices hidden nearby.

The vendors were told to pack up for security reasons.

She said that she had lost 5,000 baht that day in damaged stock and missed custom.

"Before the incident, I used to take around 3,000 baht a day. But now my income has dropped to about 500 baht a day. If the situation remains like this, I'm sure that I and other vendors will struggle to earn a living,'' Ms Sopa said.

The latest motorcycle blast has prompted the Fourth Army Region to step up surveillance efforts and checks on major roads in Yala city, especially near and around the market, to help prevent a recurrence of the bombing.

Army commander-in-chief Gen Chalermchai Sitthisad, who on Friday presided over the "Bring People Home Project" at Sirindhorn Military Camp in Pattani's Yarang district, has assured people in the deep South that public safety is his top priority.

Gen Chalermchai said he ordered his soldiers to crack down on the militant groups who are behind the recent spate of terror attacks in the region.

He has also co-opted locals to work closely with soldiers, police and local authorities in helping keep an eye out for irregularities and strangers in their communities and surrounding areas.

Local assistance is the key to maintaining the safety of communities in the region, Gen Chalermchai added.