ITD tycoon in crosshairs after arrest

Construction tycoon Premchai Karnasuta could face a maximum of 28 years in jail if he is found guilty of illegally poaching wildlife in the World Heritage Thungyai Naresuan sanctuary in Kanchanaburi province. 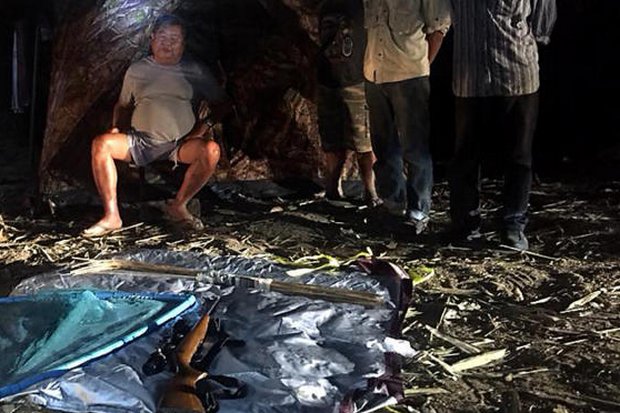 Officials found skinned carcasses of protected wild animals, including a 1.48-metre-long Indochinese leopard, a Kalij pheasant and a common muntjac, also known as a barking deer, as well as three long-barrelled guns and ammunition in his possession. (See Infographic below) 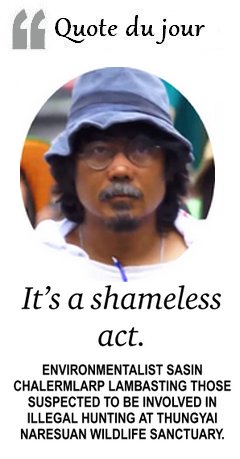 Asked by reporters if he visited Thungyai Naresuan frequently, Mr Premchai said this was only his second time. He denied poaching, and said he went there for leisure.

Natural Resources and Environment Minister Surasak Karnjanarat said Tuesday he had ordered officials to carefully investigate. Gen Surasak also said Mr Premchai was not a VIP guest of park authorities and anyone who breaks the law must be dealt with by authorities.

Mr Premchai and the three other people entered the wildlife sanctuary on Saturday. They informed park rangers they were going on a two-day, one-night trekking and camping trip and would use the 30-kilometre Tinuay-Tikong-Maharaja trail.

On Sunday a Maharat forest ranger unit informed the sanctuary management that Mr Premchai's group were staying in a no-camping area. Rangers were sent to their camp and brought them back to the sanctuary office about 2.40am on Monday.

Kanchana Nittaya, director of the Wildlife Conservation Office, admitted Mr Premchai's people sought her permission to enter the wildlife sanctuary but she told them to contact the local authorities instead.

She also said Mr Premchai's group told officials at the gate they wanted to camp in the sanctuary because they loved nature. Because it was a small group and they planned to camp out, rangers looked for them out of concern for their safety.

Meanwhile, Chaiwat Limlikit-aksorn, head of the the Department of National Parks, Wildlife and Plant Conservation's special taskforce centre on forest protection, known as the Phraya Suea unit, insisted that Mr Premchai did not in the end get permission when he entered the wildlife sanctuary. He was not a VIP (of the department) as some critics claimed.

Sources say that even if he was, he would still not be entitled to hunt.

Withoon Yimprai, Mr Premchai's lawyer, said he was not worried about the case as Mr Premchai had nothing to do with the alleged hunting.

He insisted his client's group secured permission from authorities to enter the sanctuary and the group did not want to enter any prohibited area but as it was at night and they were not familiar with the area so they set up camp near a water source.

Sasin Chalermlarp, chairman of the Seub Nakhasathien Foundation, said the wildlife sanctuary became a World Heritage site in 1991 and anyone with high social status who hunted in the area showed disrespect for the law and for conservation efforts.

He praised local park rangers for their work, and encouraged the government to set a good example by strictly enforcing the laws pertaining to the case.

Freeland, Green World Foundation, LoveWildlife, Traffic, WildAid and World Wildlife Foundation said in a joint statement: "This is Thailand's natural heritage, and no one, whoever they are, has the right to plunder it and consider themselves above the law."

The Indochinese leopard is thought to number just 2,500 across Southeast Asia and is listed as vulnerable on the list of endangered species.