The man behind the arrest of Premchai Karnasuta has been praised for his courage and determination to defend one of the last forest frontiers -- no matter how important the miscreants are.

There are no better pictures to illustrate his hard work than the one posted by Patarapol Maneeorn on his Facebook page. The image shows Wichien Chinnawong, the chief of the Western Thungyai Naresuan Wildlife Sanctuary, sleeping standing up outside Thong Pha Phum police station after handing over the president of the Italian-Thai Development Plc (ITD) and three others to police. 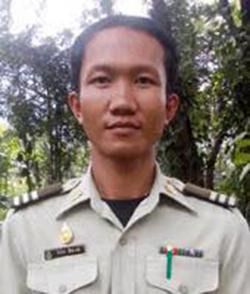 "Look at that. If he could not go to the limit, he could not sleep like this," writes Mr Patarapol, who is a veterinarian at the Department of Natural Resources, Wildlife and Plant Conservation.

"Take care, 'Chien', '' he writes and invites others to show their support in the post.

More than 1,500 netizens have shared the post and the list of people sending him moral support keeps growing.

Mr Wichien led his park ranger team on Saturday to Huai Pachee, an area in the park where camping is banned, where they found Mr Premchai and three other people.

They were stunned to find skinned carcasses of protected wild animals, including an Indochinese leopard, along with rifles.

They took the items to Mr Wichien's office for safekeeping at 2.40am on Sunday.

The rangers went back to the location later that day to seize the remaining items and handed the suspects over to police in Thung Pha Phum district in Kanchanaburi on Sunday night to face nine charges.

Mr Premchai and his group denied poaching protected wild animals. They could face a maximum of 28 years in jail if found guilty.

The arrest of someone as powerful as the ITD president has raised questions about Mr Wichien's future.

Sasin Chalermlarp, chairman of the Seub Nakhasathien Foundation, told Thai PBS the public should keep an eye on what happens to him and called on the public to protect the official.

Mr Wichien's job is safe, said department director-general Thanya Netithammakun, who picked him to take care of the western frontier of the country.

Mr Wichien said the policy from the department chief was clear: There is absolutely no kow-towing to influential figures.