Forest firefighters put out a blaze in a forest reserve in Mae Sot district, Tak, on Thursday. (Photo by Assawin Pinitwong)

TAK: Fires in a national park and a forest reserve in Mae Sot district on Thursday burned out about 140 rai of bushland, with a third hotspot extinguished before the flames took hold.

Phop Duangkaew, head of a forest control unit in Tak, led a team to put out a fire in Pacharoen waterfall national park near Ban Huay Rapring in tambon Pawor, Mae Sot district.

About 80 rai of forest was damaged. A hotspot, indicating where the fire started, was found in the area, Mr Phop said.

The team later went to put out an other fire in Mae Sot national forest reserve, near Ban Mai Phothong in tambon Mae Lamao.  The fire damaged about 60 rai of forest before being extinguished. The team also found a hotspot in the area.

The fire control unit found a third hotspot in a forested area in the district, and quickly put it out before much damage was done. 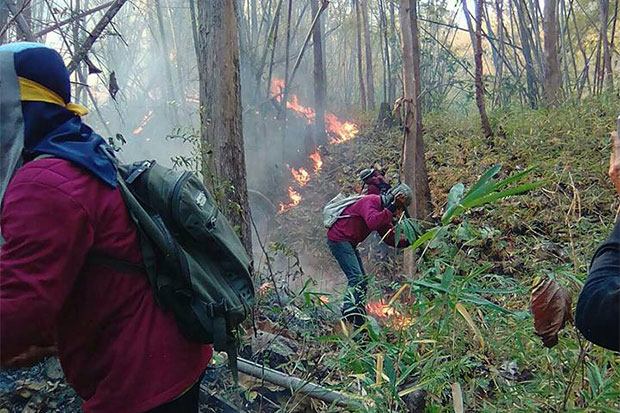 Forestry officials beat out the flames  at one of two burning forest areas in Tak on Thursday. (Photo by Assawin Pinitwong)