A retired senior official from the Natural Park, Wildlife and Plant Conservation Department sought permission for the president of Italian-Thai Development (ITD) and his party to enter the Thungyai Naresuan sanctuary in Kanchanaburi, where they are accused of poaching, a senior official said yesterday. 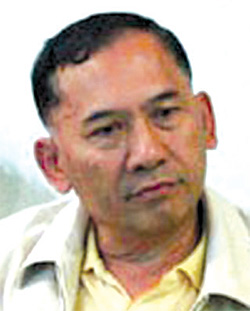 They were found in possession of the carcasses of protected wild animals, including a 1.48-metre black panther, a Kalij pheasant and a barking deer, as well as three long-barrelled weapons and ammunition.

The four have been granted bail with a bond of 150,000 baht each. They have denied all charges.

Kanchana Nittaya, director of the Wildlife Conservation Office, admitted she was contacted by an ITD adviser who is a former senior department official to seek permission for Mr Premchai’s visit to the sanctuary.

Ms Kanchana has come under pressure over a report that a senior official ordered the park to acquiesce to the visit.

She said she was contacted on the phone by former department official Noppadon Prueksawan on Jan 31.

Mr Noppadon t old her that “his acquaintance” wanted to obtain permission to enter the sanctuary for “research purposes”, Ms Kanchana said.

She told him she did not have authority to grant the request and passed on contact information to the 3rd Regional Office of Protected Areas in Ratchaburi’s Ban Pong district.

Ms Kanchana insisted she did not know the ITD president personally. ‘’We did not think he [Premchai] would turn out to be like this,’’ she said. Ms Kanchana was among nine people summoned yesterday by police for questioning.

Mr Noppadon, who serves as an adviser on environmental affairs at ITD following his retirement from the department, could not be reached for comment yesterday.

In 2012, during a visit to seek information on golden teak forests earmarked for a dam project in the northern province of Phrae, Mr Noppadon faced fierce resistance from local residents.

He claimed he came from the Department of National Parks, Wildlife and Plant Conservation but local residents learned he had already retired and was working on behalf of ITD.

Mr Noppadon has also served as a member of a working panel for former prime minister Chuan Leekpai.

A source said a department executive told Wichien Chinnawong, the 38-year-old chief of the Western Thungyai Naresuan Wildlife Sanctuary, that “guests” of a senior ex-agriculture official would be coming to the sanctuary.

As a result, Mr Wichien sent a letter to the director of the 3rd Regional Office of Protected Areas seeking official clearance for Mr Premchai and his party. The letter was released to the media yesterday.

According to the document, dated Feb 2, the Western Thungyai Naresuan Wildlife Sanctuary was informed by phone by a director (the name was withheld) that Mr Premchai and his group would like to enter the sanctuary to study Tinuay-TikhongMaharaj nature routes on Feb 3-4 by car.

The sanctuary gave them permission and forwarded their request to the director of the 3rd Regional Office for approval.

However, the request was not approved due to holidays and incomplete paperwork.

Deputy police chief Srivara Ransibrahmanakul said police have not yet brought any charges against Mr Wichien.