Mr Wichien said he and the other officials were in good spirits and thankful for the overwhelming support they had received from the public and their supervisors following the incident.

He said he and the other 200-plus park rangers would do their best to protect the wildlife sanctuary, adding that security forces had also sent troops to join forest patrols.

The National Park, Wildlife and Plant Conservation Department has ordered all national parks and sanctuaries adjacent to Thungyai Naresaun to step up patrols.

Thong Pha Phum police have so far pressed nine charges including illegal poaching against Mr Premchai, 63, and members of his hunting party. All denied the allegations.

They were arrested last Sunday in the sanctuary after they were found in possession of the carcasses of wild animals, including that of a rare black panther.

Police on Sunday also issued another summons for Noppadon Prueksawan, a former official of the Department of Natural Park, Wildlife and Plant Conservation to report to by Thursday. Currently serving as an advisor to ITD, Mr Noppadon was implicated as the person who sought permission and facilitated Mr Premchai and his entourage’s visit to the sanctuary.

He said the lead investigator remains the Thong Pha Phum police, noting it is the national police chief’s decision as to whether the case will be transferred to the bureau.

Meanwhile, a NIDA poll released Sunday found 51.2% of 1,250 respondents agreed the five-year jail term and a fine up to 50,000 baht meted out for hunting protected wildlife animals is too light and penalties should be tougher.

However, 68.8% of the sample said they do not believe the authorities will enforce the law on poachers fairly.

The satirical photo below was posted on several social media accounts on Sunday, including the main Facebook page of the Thungyai Naresuan Wildlife Sanctuary. (FB/P.YingIndyclub) 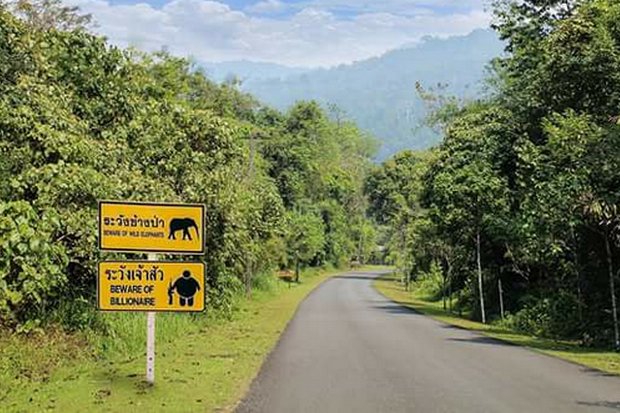