The Myanmar passengers wait on the side of the road after seeing the bus taking them to the border caught fire and then crashed into the rear of an 18-wheeler in Mae Sot district in Tak on Thursday. (Photos by Assawin Pinitwong)

TAK: A bus driver saved his 50 Myanmar passengers after the vehicle caught fire, and then lost his own life trying to save the bus.

Samran Duangsa-ard took the workers from Phetchaburi province to the border district of Mae Sot on  Wednesday. They were returning home to Myanmar.

As the double-decker bus, operated by Pongsawad Tour, was travelling a hilly section of road in the district the engine caught fire. The driver quickly pulled over and ushered the passengers from the vehicle, they told Mae Sot police.

The 60-year-old driver and some passengers then used a fire extinguisher and buckets of water to fight the blaze in the engine compartment.

When the fire was almost under control the bus started to roll forward, down the hill. The driver leapt back into the bus and into the driving seat, trying to stop it.

Instead, it kept rolling downhill and finally crashed into the rear of a slowly moving 18-wheeler trailer truck. (continues below) 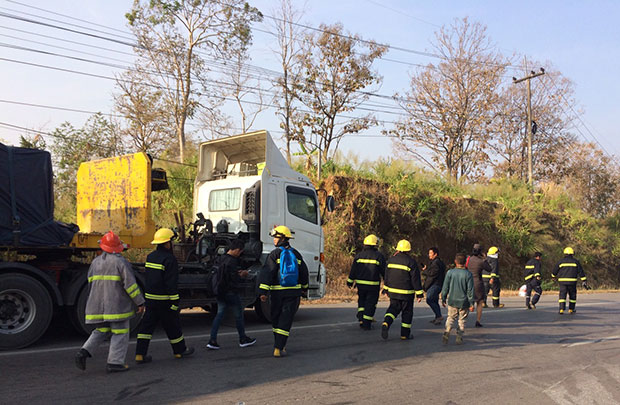 The halted truck, after it was hit in the rear by the rolling bus.

Pol Lt Col Jeerasak Sritham, the deputy chief of Mae Sot police station, said the driver was killed in the collision. His body was taken to Mae Sot hospital.

Police suspected the fire had damaged the brake system, causing the bus to start rolling down the hill with  the driver unable to stop it.

Truck driver Theerasin Racha told police he had seen the bus stopped with its engine on fire. He did not stop to help as he saw people were already putting out the fire.

Then he noticed the bus moving quickly downhill towards his truck, and finally running into the back of the trailer.