Court delays may kick in

The "Constitutional Court factor" has not been reflected in the election roadmap and this could further delay the timeline leading up to the general election, originally scheduled for November and now expected in February, the government has said.

If either of the two remaining "organic" laws required to facilitate the poll wind up being forwarded to the court for review, the date is likely to postponed yet again, critics say.

Of the 10 organic laws needed to put parts of the new charter into practice, four relate to the upcoming national election; of those, two have already been approved by the National Legislative Assembly (NLA).

With doubts growing about when people will finally get to hit voting stations to usher in a new period of democracy, Deputy Prime Minister Wissanu Krea-ngam has reportedly received a flood of legal inquiries about the roadmap. Mr Wissanu is widely considered the top legal expert in the recently reshuffled cabinet.

As confusion reigns over the timing of the poll, Gen Prayut's promise of a November date now seems to have been thrown out of the window.

However, government insiders insist it is not entirely up to the prime minister to decide on a date. The decision rests in the hands of the NLA, the Constitution Drafting Committee (CDC) and the Election Commission (EC), they say.

The NLA and the CDC are among the "five rivers" -- pillars of power -- that came into being after the May 2014 coup. The others are the National Council for Peace and Order (NCPO), the cabinet and the now-dissolved National Reform Council.

The sources said there are a worrying number of misconceptions regarding the NCPO's alleged influence over the other "rivers".

Despite the fact the cabinet is stocked with the regime's top brass, who have also been granted seats in the NLA, the insiders refuted claims this would enable them to wield unfair influence over key decisions whenever the cabinet votes on issues.

They also brushed aside claims about the supposedly "insidious" coaxing of the CDC by the regime as it attempts to rewrite the constitution in whichever way it sees fit.

The sources said the committee was made up of legal experts and respected individuals from a range of fields who were not bound by servitude to the NCPO.

Critics charge that certain government figures may be seeking to delay the election by capitalising on the fact the two organic laws on the election of MPs and the selection of senators still require approval.

They still have a long road to travel before they can take effect. Critics argue that getting them passed is unduly complicated and creates windows for abuse by people with influence along the way.

After being scrutinised by the NLA they were sent to the CDC and the EC, which has disputed some of the content in both.

The three parties -- NLA, CDC and EC -- will meet to mull over the changes, which have been deemed impractical if not unconstitutional.

Politicians were quick to question the constitutionality of the two bills.

Democrat Party deputy leader Nipit Intarasombat said it would not be a surprise if one or both the bills are referred to the Constitutional Court.

Critics say some of the legislative content, especially for the bill on the selection of senators, has been twisted to the point where it no longer aligns with the spirit of the charter. If so, the court would be required to intercede to settle the matter.

Mr Wissanu said the government never really took this into account when drawing up the road map.

Worse yet, no one seems to know how long the court would need to deliberate such a delicate matter.

Mr Nipit said the second bill, on the election of MPs, could be shot down if the CDC were to agree with other panelists that it needs to be rewritten.

That would require it to be sent back the NLA for another vote. Critics say this could serve as its death knell.

The government source said restarting the drafting process for this organic law would have serious consequences for the election and the NCPO, which would come under immense pressure as a result. 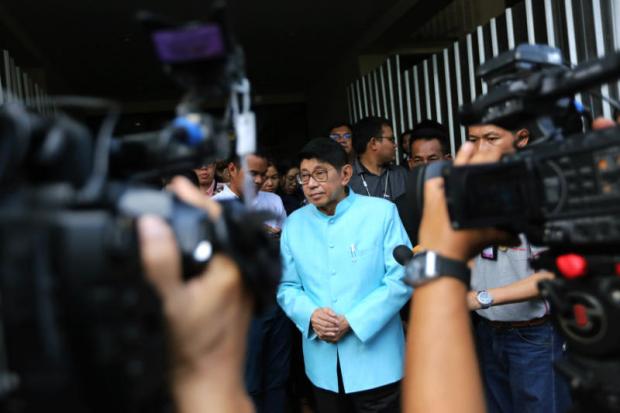 Taking a punt on social media

The political scene was abuzz this week with rumour, speculation and suspicion following reports that ousted prime minister Thaksin Shinawatra was in Hong Kong to meet bigwigs from the Pheu Thai Party who were ready to fly off there to see him.

It has been reported that Pheu Thai's de facto leader has a new policy to share with key party members to battle the regime that has signalled an interest in returning to power after the next general election.

According to political observers, the military government is going at full throttle to win public support and Prime Minister Prayut Chan-o-cha's remark that he has "turned into a politician" should not be taken lightly given recent developments, including the 90-day extension of the enforcement of the organic bill on the election of MPs.

Critics speculate that the extension, which will delay the election to February next year, is to facilitate the regime's ambition to set up a party to contest the polls.

According to political sources, Thaksin who believes he retains strong popularity, is considering shifting away from conventional vote-wooing methods and plans to invest in social media more heavily in the upcoming election campaign. The fugitive leader believes using social media to solicit votes is more cost-effective than deploying political canvassers on door-knocking campaigns.

However, the change is said to have frustrated many Pheu Thai politicians who remain loyal to the party despite being approached by those in power to switch allegiance after the coup.

According to the sources, this group of politicians is confident the party has maintained its strongholds in the provinces and they hope to return to the House of Representatives under its banner largely because Pheu Thai has solid financial support. Threatened by a lack of funding, some are said to be having second thoughts about their political future with the party.

Thaksin's idea to rely heavily on social media platforms is also threatening to alienate Pheu Thai's political allies in several provinces such as Nakhon Pathom, Ayutthaya, Lop Buri, Chon Buri and Rayong. Those in the lower parts of the North and the Northeast are also said to be recoiling.

There are at least 70 former MPs loyal to Pheu Thai in those provinces. And if they are turning away from Pheu Thai, the party will face a crisis in the elections. If the politicians decide to part company with Pheu Thai and it fields new candidates in the next polls, the new candidates would not stand a chance against these veterans.

Several opinion polls indicate that the Prayut-led administration's approval rating is sliding. At the same time, some polls predict Pheu Thai would win the election if the vote was held today.

However, the sources reckon the planned change to employing more aggressive social media tactics to woo voters in order to "cut costs" may not bode well for the party.

Political analysts seem to agree that the policy change could cause the party's popularity to plummet and Pheu Thai would face an uphill battle to win a mandate. In their opinion, there is no better way for parties to engage with canvassers in election campaigns than to give them solid funds -- that is always how election campaigns have operated.

While social media has so far proved to be a powerful tool in several social campaigns, their effectiveness in driving a political cause remains in doubt, according to political observers. And the fugitive ex-leader could find himself in a "surprise" situation if he gives up the old-school door-to-door trick when the election campaigning hit high gear. 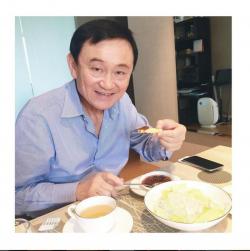 While a precise date for the general election remains shrouded in mystery -- having already likely been pushed back from November -- efforts are under way to form a new political party with the backing of key military figures, a source said.

They are trying to strike deals with factions from preexisting parties and persuade them to team up in support of Prime Minister Prayut Chan-o-cha so he can resume his place at the helm after the poll, the source added.

The military-backed party may operate under the name Pracharath (people-state partnership). This refers to a government policy aimed at bringing together the state, private sector and public to boost economic growth and make the nation more competitive.

The Pracharath programme is being steered by Deputy Prime Minister Somkid Jatusripitak, who in the past served as the head of the defunct Thai Rak Thai Party's economic team.

This time, Mr Somkid is expected to assume a key role in the new party, the source said.

The same source added that several former leaders of political factions from Thai Rak Thai, particularly those based in the Central Plains and lower Northeast, are being approached to join.

The upper North and Northeast serve as strongholds of the Pheu Thai Party, meaning they are best left alone as voters there remain steadfast in their support and loyalty.

The source said the new party is expected to garner at least 60 House seats from the Central Plains, lower North and lower Northeast.

Movers and shakers behind the scenes are said to be happy with the growing support for the new party.

Moreover, several former key figures from Thai Rak Thai are believed to be making themselves available for deputy prime ministerial posts if such a party is formed and wins the poll.

On Dec 22, Gen Prayut invoked a Section 44 order in his capacity as chief of the National Council for Peace and Order (NCPO) to amend an organic law so that existing parties could have more time to review their membership databases and re-register.

Section 44 is a hangover from the previous interim charter as it was carried over to the current constitution.

Parties have cried foul over the order, saying it will benefit emerging parties. They say requiring all party members to register again amounts to a "reset" that would open the door to some defecting elsewhere.

The order has been met with fierce criticism from both the Pheu Thai and Democrat parties, which have petitioned the Constitutional Court to rule whether the order violates the constitution.

Contentious issues stemming from the amended organic law relate to party members being required to produce letters to confirm their membership and pay party fees within 30 days from April 1 or lose their status.

The order also gives new parties a month's head start. Existing parties will not be able to begin their member registration process until April 1, while new parties can start on March 1.

Many politicians expressed concerns about the pressing deadlines introduced as a result of the order having been invoked. 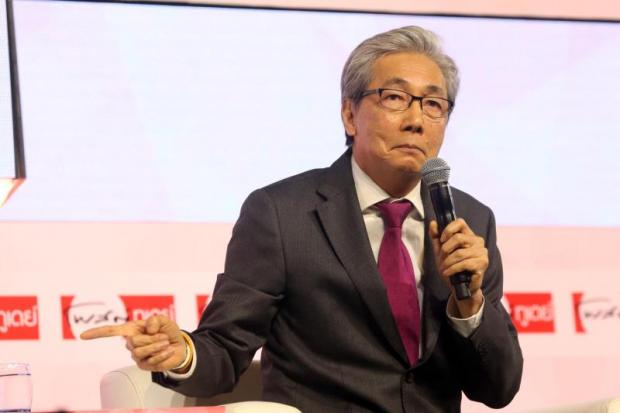