Hundreds of students and parents from Saint Gabriel's College gather at the school on Monday morning, demanding the resignation of school director Vinai Viriyavidhayavongs. (Photo by Apichart Jinakul)

The director of Saint Gabriel's College has stood aside after students, parents and alumni protested and demanded his resignation on Monday morning, accusing him of poor management in appointing new staff.

About 500 people gathered at the private school's campus in Bangkok on Monday morning to declare their lack of confidence in school director Vinai Viriyavidhayavongs over his appointment of a senior adviser and a school nutritionist.

Students wearing their uniforms occupied the lawn while the parents and alumni, dressed in black, gathered behind them holding placards calling for an investigation into the director's conduct and management decisions, and his resignation.

They are upset with Mr Vinai's appointment of a senior adviser they deem to be unqualified for the post and hiring of a school nutritionist they hold responsible for the "poor quality" of the food provided for young students.

Mr Vinai is also accused of allowing his adviser to interfere in the school's management, including budget expenditure, and causing widespread frustration among personnel.

The academic performance of the school, long one of the top-performers, has also dropped based on the results of the Onet test in the 2016 fiscal year, when the ranking slid to 59.

Alumni Prawit Haruensri said the Saint Gabriel's Foundation should set up a committee to investigate the director's conduct, and appoint someone else run the school for the time being.

The protesting parents and alumni say their intention is to protect the school. They have given Mr Vinai one week to clarify the matters at issue in writing, or face further protests.

An hour after the protest began, the director descended from his office to have a look - then retreated after his appearance drew boos and jeers from the parents and alumni.

His representative told the protesters that Mr Vinai would clarify the matter after the protest ends.

Mr Vinai later tendered a letter to the school board, saying he had ceased working in all executive roles temporarily and immediately to relieve the situation at the school and pave the way for an investigation. 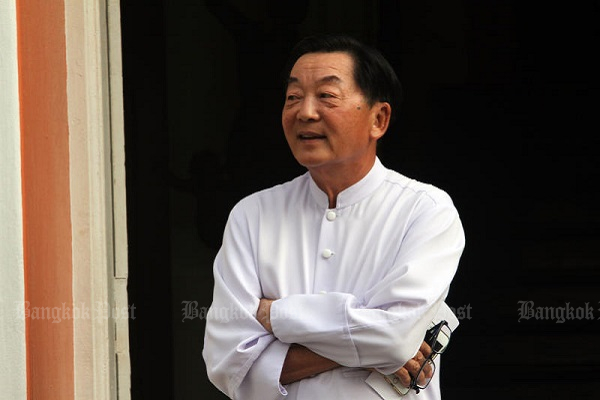