Members of the Saengyoktrakarn family hold a media conference in front of their gate at the Seri Villa housing estate in Prawet district, Bangkok, on Tuesday. (Photo by Somchai Poomlard)

Two women who used an axe and a metal pole to attack a parked pickup truck that was blocking their driveway in Prawet district of Bangkok are facing charges of property damage and intimidating the owner-driver.

The incident was videoed and the clip went viral on social media.

The pickup's driver, meanwhile, faces a fine for parking the vehicle in way that blocked traffic.

Rachanikorn Lertwasana, 37, told investigators she parked her vehicle in directly front of the driveway entry gate to house No 37/208 on Soi Srinakarin 55 about 11.15am on Sunday, before going shopping at a nearby market.

Ms Rachanikorn, who is from Samut Sakhon province, claimed she thought the house was deserted because there were numerous announcements posted on the twin gates, which were fastened with wire.

It was her habit to apply the parking brake anytime she parked her vehicle, but she regretted doing so because it angered the two women who wanted to drive out of the house, but could not move the truck out of the way.

She told police she returned to the vehicle only 10 minutes later, to find onlookers surrounding her truck and the two women busily smashing it up. Some were using their phones to video the incident.

One woman used an axe and the other used a long metal pole, Ms Rachanikorn said. When she tried to calm them down by apologising and giving them a wai, the two women threatened to hurt her. Someone else had to escort her away from the two angry women, she said.

Pol Col Alongkorn said the owner of the house had a history of filing police complaints over similar incidents in which a parked car had blocked the entry gate on four occasions in the past three years. But no such violence had been reported before.

He said although the truck driver had not violated the traffic regulation prohibiting parking in that area between 6am and 10am, she still faced a fine of 500 baht for parking in a manner that obstructed traffic.

The two women in the video clip, later identified by police as Ratanachat Saengyoktrakarn, 61, and Ranee Saengyoktrakarn, 57, were being summonsed to answer charges of damaging private property, intimidation and carrying weapons in public.

Ms Ratanachat and Ms Ranee called a press conference on Tuesday morning in front their house, saying the family had been suffering from the problem of irresponsible parking for nearly a decade.

“We had to smash up the truck to protect our rights,” they agreed. They did not feel they were overreacting in attacking the vehicle because the truck driver had hesitated over moving it out of the way even after she returned to it.

The two said they had first called police to complain their gate was blocked again, but no officials came to the scene.

In previous similar cases, sick family members could not be rushed to hospital simply because someone had blocked the gate with their car, they said.

When the owner eventually returned she told them she did hear the horn honking, but still wasn’t done with her shopping at the market, they said.

The two women also refused to pay Ms Rachanikorn compensation for the damage to the truck, estimated at 50,000 baht. They said the Bangkok Metropolitan Administration had to pay it, for its failure to enforce land use laws in the housing estate, the Seri Villa. 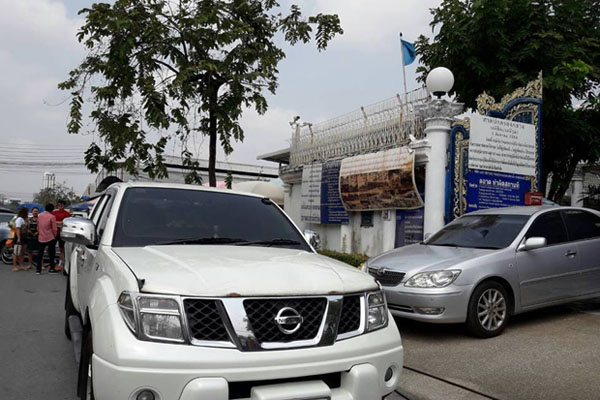