LOEI: The driver was killed and eight passengers hurt when an inter-provincial bus hit a barrier at the side of a bridge, veered off the road and overturned in Phu Kradung district on Tuesday morning.

The fatal crash occurred at  around 6.30am when the the Khon Kaen-Loei bus was descending a steep stretch of Highway No.201 in Phu Phaman national park.

The driver lost control of the vehicle, causing the bus to hit the barrier at Pha Nok Khao bridge. The bus skidded off the road and overturned, said Chanont Chatwongthong, head of Loei-based Sawang Khiritham rescue foundation.

The force of the crash killed the driver and injured eight passengers, one man and seven women. Rescue workers rushed the injured to a nearby hospital. The driver was later identified as Boonmee Umpha, of Loei. 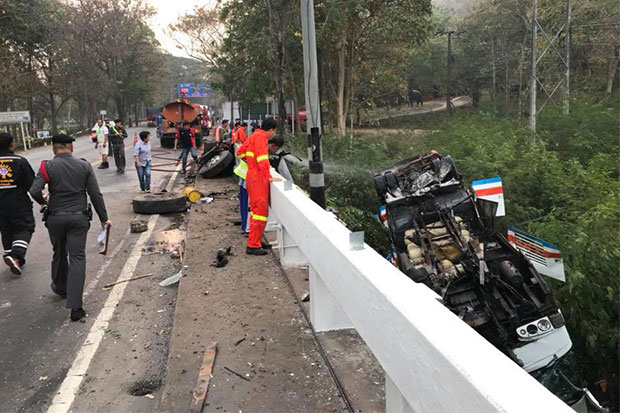