Meat from the carcasses of protected wild animals is weighed before further inspection following the arrest of construction tycoon Premchai Karnasuta on Feb 4. He and three subordinates are accused of poaching in Thungyai Naresuan wildlife sanctuary in Kanchanaburi. (Photo: Department of National Parks, Wildlife and Plant Conservation)

Expert analysis has confirmed that meat and bones from a black leopard were found in a pot of soup at the illegal campsite of Premchai Karnasuta and his companions in a wildlife sanctuary in Kanchanaburi.

The confirmation emerged as the public outcry builds over the delay in the police investigation into the poaching charges against the construction magnate, with more leopard graffiti appearing on walls and public screens and leading celebrities appearing with symbolic black crosses on their palms.

With the eyes of society now firmly on the police promise to act against the suspects in a straightforward way, Mr Premchai's wife also faces a charge of illegal possession of the four African elephant tusks found at their Bangkok mansion.

The Italian-Thai Development Plc president and three associates were arrested on the night of Feb 4 on suspicion of hunting in Thungyai Naresuan wildlife sanctuary, a world heritage forest in Kanchanaburi.

Wildlife officials found the carcasses of protected species, including the pelt of a rare black leopard, near their camp, and beside their tent a cooking pot containing soup.

Pieces of meat, two leg bones, intestine and hair found in the soup have now been confirmed by experts to be from a black leopard, deputy national police chief Srivara Ransibrahmanakul said. The tests were made by the Department of National Parks, Wildlife and Plant Conservation.

He said it was a female leopard.

Examination of a chopping block and knives found in the suspects' camp had also found DNA from a female leopard.

"It's the same leopard in the soup," Pol Gen Srivara said.

Other carcasses were confirmed to include a silver pheasant and a wild boar, not a barking deer as earlier thought.

Pol Gen Srivara said this evidence backed up the charges against the suspects.

A claim that the black leopard carcass had been bought from a villager was not logical, he said. The nearest village was about 50 kilometres away and it was difficult to get to it.

Mr Premchai and other three suspects still deny the charges against them, which include illegal hunting and possessing firearms in a sanctuary.

The case has sparked a fierce outcry from environmental groups, celebrities and the public in general.

The removal of black leopard graffiti from a wall on Sukhumvit soi 58 by an unidentified man last Saturday only led to a new leopard painting appearing later on the same wall. It also prompted Call for Animal Rights Thailand to encourage artists and householders to join hands in a new graffiti campaign. (continues below) 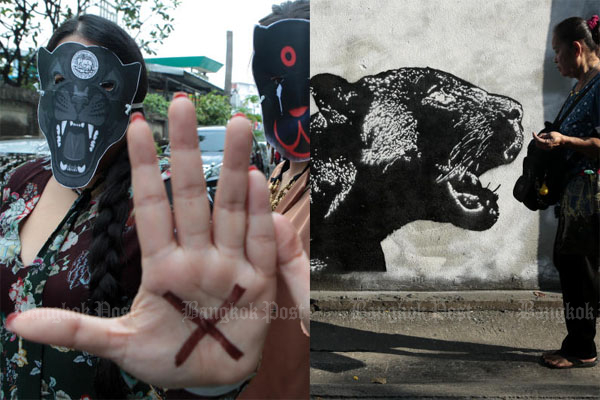 House owners can allow graffiti artists to paint on their walls, and share photos of the artwork on Facebook, the group said.

In Songkhla's Hat Yai district, pictures of a black leopard have been also seen on a giant LED screen used for advertising at an intersection near the downtown area, Prachachat Turakij newspaper reported.

Actresses, actors and singers have also appeared with black crosses painted on their palms, joining the chorus of protest against poaching. The symbol had been shown earlier by animal welfare advocate Chonlada "Ke" Mekrati who joined the Seub Nakhasathien Foundation in calling on police to speed up their investigation in the Premchai case and take it to court.

The four tusks were earlier claimed to be from Thai Asian elephants, but a DNA test found the opposite.

Ivory from foreign elephants cannot be registered under Thai law.