A tourist poses for pictures in the lap of a large Buddha statue at Wat Yai Chai Mongkol in Ayutthaya. (Photo by Sahai Phordam via @queentogtherriseone's Facebook page)

A female tourist sitting in the lap of a large Buddha statue at Wat Yai Chai Mongkhol has attracted a lot of criticism from netizens after her photos went viral online.

The Ayutthaya Historical Park Office is preparing to file a complaint against the unidentified tourist for the inappropriate behaviour at the historic temple.

The woman was posing for pictures among many Buddha statues in the compound of the temple, with the ancient Chai Mongkol Pagoda in the background.

A member of this Facebook page who posted the pictures wrote “I went to the Ayutthaya temple [on Wednesday] and saw this group of tourists. I was not sure whether they were Thais or foreigners because I was on an upper deck of a structure opposite the pagoda. I found the behaviour inappropriate.’’

He called on authorities to warn tourists visiting historic sites as each country had a different culture, he wrote.

Nopporn Chompirom, who shared the post on the Ayothaya Facebook page which was widely shared online, said he did not take the photos himself. He asked for the photos from someone to pose them on the Facebook page in the hope that authorities would take action. As a native of Ayutthaya, he felt bad if people show disrespect towards the Thai culture and Buddhism.

Phra Khru Sirichaimongkol, Phra Nakhon Si Ayutthaya district monk chief and abbot of Wat Yai Chai Mongkol, said the temple would put up signs in its compound to warn tourists about inappropriate behaviours while taking photos with Buddha statues and in other ancient ruins.

However, the temple had no authority to take action against the tourist sitting in the lap of "Phra Rattana Nimman'' Buddha statue as it was the duty of the Fine Arts Department. The statue was built on the Chai Monkol Pagoda's northeastern side. King Naresuan the Great built the pagoda to celebrate a battle victory.

Sukanya Baonert of the Ayutthaya Historical Park Office said she was disturbed by the pictures posted on social media. The office had earlier coordinated with tour guides to create a better understanding among tourists following previous incidents involving tourists showing inappropriate acts at historic sites.

She would ask officials to file a complaint with police against the woman.

Last month, five tourists drew heavy criticism among Thais for climbing the base of Wat Mahathat in Phra Nakhon Si Ayutthaya district in Ayutthaya. They were charged and later apologised to the public. 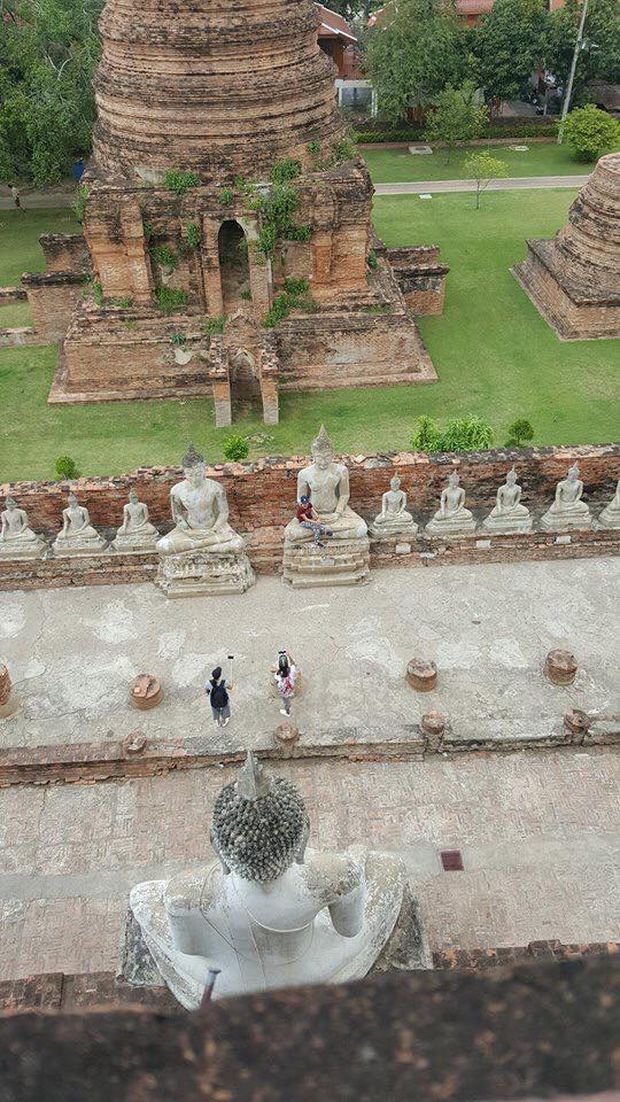