Rescue workers rush to take injured people to a hospital in Phuket following the crash of a small training plane at a rubber plantation in Thalang district on Saturday morning. (Photo by VR Fa Phuket rescue team via Achadtaya Chuenniran)

PHUKET: Two people, including the pilot, were killed and two others seriously injured when a small training plane crashed in a rubber plantation after encountering strong winds on Saturday morning.

The trainer, carrying four people, went down opposite a welfare home for the elderly in tambon Pha Khok of Thalang district, said Pol Capt Natthee Pichitchainimitmet, a duty officer at the Thalang police station, who was alerted at 11am on Saturday.

Police and rescue workers who rushed to the scene found the wreckage of the small craft with two men dead inside and a man and a woman badly hurt. The injured were taken to Vachira Hospital.

The dead victims were pilot Wattana Thinphang-nga and Flying Officer Narin Thaweerat. The injured were Ardol Lamae and Orawan Jindarat, who were aviation maintenance students at Thalang Technical College.

Pol Col Kritsana Pattanacharoen, deputy spokesman for the Royal Thai Police, said the fatal crash was caused by strong winds during the landing.

The Butterfly 05 (HS-PMS) light aircraft bearing the name and logo of the Siam Aviation Association left Phuket Airpark at 10.05am, he said. The pilot subsequently attempted a landing at an airfield in tambon Pha Khok, about 400 metres away from the crash scene. However, there were strong winds at the time, forcing the pilot to circle in the air.

He attempted another landing but failed as the strong winds persisted. When he accelerated the plane, it became unstable and suddenly fell into the rubber plantation, said Pol Col Kritsana. 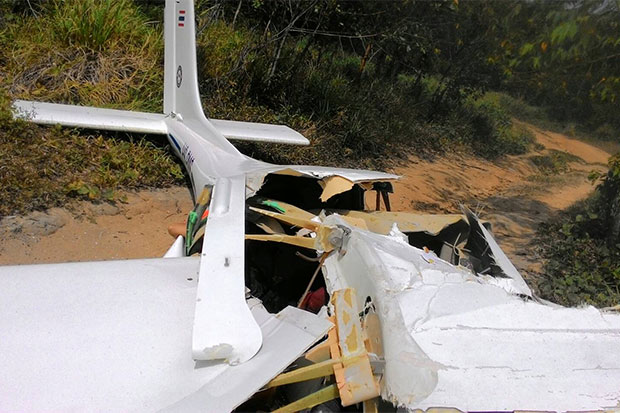 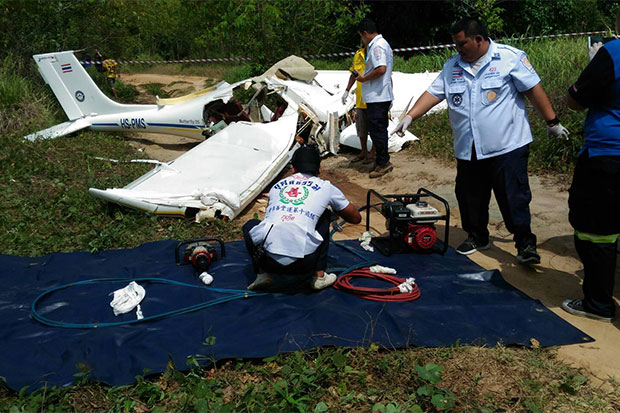