80% of welfare funds 'plagued by graft'

People give information to PACC officials on the possible embezzlement of welfare funds for the poor in Narathiwat province on Feb 20. (Photo by Supapong Chaolan)

Irregularities have been found in the distribution of welfare allowances for the poor in 44 provinces, representing 80%, or 97 million baht, of the national budget for the purpose, as the probe continues in the remaining 32 provinces.

The Public Sector Anti-Corruption Commission (PACC) has been investigating possible corruption involving the budget for the poor of 122 million baht in fiscal 2017 at 76 protection centres for the destitute across the country.

The centres are under the supervision of the Ministry of Social Development and Human Security.

Pol Lt Col Wannop Somjintanakul, assistant secretary-general of the PAAC office, said on Monday the priority was the centres in 37 provinces which received 1 million baht or more each.

“We should finish looking into them by March 31 and the probe into the rest will be completed by May 31,” he said.

As of Monday, he said irregularities had been found in the distribution of the funds in 44 provinces (see map below), representing 80%, or 97.8 million baht, of the national budget for the purpose.

The cases for the remaining 37 provinces are being submitted to the PACC.

The centres in the remaining 32 provinces, representing 20% or 25.3 million of the budget, are being checked for irregularities.

Several methods were used to embezzle the funds. In some provinces, all documents were forged and the intended recipients got nothing while in others some papers were forged and some received the money.

In some provinces, certain recipients were not qualified. In some cases, the money was given only when the probe began and the recipients were instructed to inform investigators they had received the money in full.

The PACC normally handles cases of corruption and malfeasance against lower-ranking officials while the National Anti-Corruption Commission takes care of such cases against politicians and high-ranking officials. 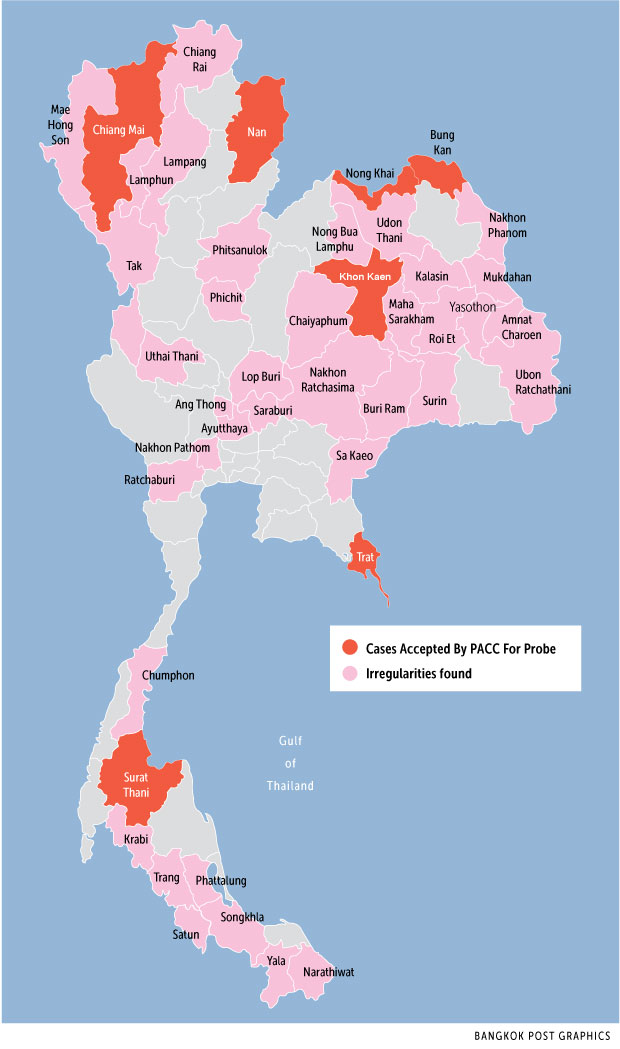