The wheelchair-bound, equal-access activist Manit 'Saba' Intharapim refused to sign a paper Monday attesting he is really entitled to use a BTS Skytrain elevator. Here, he reenacts the scene when he punched the glass elevator entrance door. (Photo by Pawat Laopaisarntaksin

A wheelchair-bound rights activist who smashed and broke a glass elevator door at a BTS Skytrain station on Sunday night has threatened to take legal action against the authorities if public transport remains "unsuitable" for the disabled.

Manit Intharapim, director of the "Accessibility Is Freedom" equal rights organisation, admitted at a press conference Monday that he smashed a glass guard door in front of an elevator on the second floor of the Asoke BTS station after "losing his temper".

He said he was at his wit's end with how time consuming and inconvenient it is to travel on the BTS as a disabled person.

"If we don't see any positive, tangible developments from the Transport Ministry in one week, I will seek legal action against the ministry, the Bangkok Mass Transit System Plc [BTSC] and the Bangkok Metropolitan Administration [BMA]," he said.

Recalling the incident, the 50-year-old said he was asked to sign a sheet to confirm he was a disabled individual to use the skytrain's services for free at Asoke station.

After refusing to sign the sheet several times, he went to purchase a one-way ticket, but insisted he was still denied access because authorities would not open the elevator guard door for him to reach the platform until he signed the sheet.

"After over half an hour of arguing, I must have just lost it and punched the glass door," Mr Manit said. 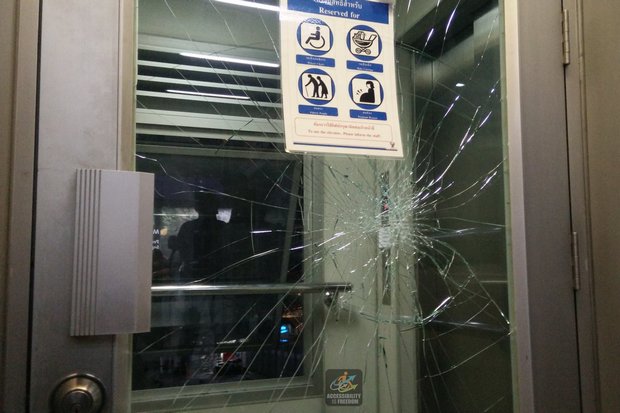 Mr Manit admits he smashed his fist into the door and broke the glass. (Photo FB/AccessibilityIsFreedom)

"There should at least be some other method which is more efficient and less degrading than forcing us to sign a sheet."

Disabled people are allowed to use skytrain services for free, provided they possess a disabled individual identification card, issued by the Department for Empowerment of Persons with Disabilities.

However, Mr Manit said this was the first time he had been asked to sign a sheet to gain access to the skytrain.

"It was not originally my intention to stir up so much media coverage, but it seems to be the only way to get a point across," he said. "I have been fighting for equal rights for over 20 years."

Mr Manit is a member of the Transportation for All (T4A) network, a group of organisations dedicated to improving public transport systems throughout the country.

The group has reportedly been meeting officials at the Transport Ministry for over three years, but the meetings have shown "little to no development", he said.

BTSC reports say that 17 out of the combined 36 stations of the main Sukhumvit Line (Mor Chit-Samrong) and the Silom Line (National Stadium-Bang Wa) currently have elevators installed in them.

Mr Manit said grounds for legal action to be sought against transport authorities would be an Administrative Court ruling in 2014, which stated the BTSC must enable travel for disabled and elderly individuals within a year of the ruling.

He said the disabled still face too many problems.

A statement by the BTSC addressing the incident will be released later today, according to company CEO Surapong Laoha-unya.