Angkhana Neelapaijit, speaking on the 14th anniversary of the abduction and disappearance of her husband, civil rights lawyer Somchai, says the case shows the end of justice in Thailand. (File photos)

The wife of missing civil rights lawyer Somchai Neelapaijit has said she wants to see her husband's case become a lesson for Thai society.

Angkhana Neelapaijit, who is also a member of the National Human Rights Commission, was speaking at a seminar yesterday to mark 14 years since Mr Somchai disappeared, the day after he publicly accused police of torturing Muslim clients of his who were being detained. Nothing has been heard of him since.

The Department of Special Investigation (DSI) has told Ms Angkhana it is closing the investigation.

The International Commission of Jurists (ICJ), together with the United Nations Human Rights Council and Amnesty International Thailand, hosted the seminar at Thammasat University to discuss loopholes that undermine protection for torture victims and cases involving forced dissapearances.

"The DSI has sent us a report to let us know the investigation into my husband's disappearance will end. Their only explanation was that they cannot find any suspects and they have insufficient evidence to pursue the matter further," Ms Angkhana said.

"The state has a responsibility to find the truth and bring justice. The state should also realise that financial compensation is not an appropriate method of closing an investigation into an atrocity like this," Ms Angkhana added.

The deputy Regional Representative of the Office of the United Nations High Commissioner for Human Rights (OHCHR), Laurent Meillan, said that forced disappearances and torture cases are still not adequately covered under domestic law in Thailand. 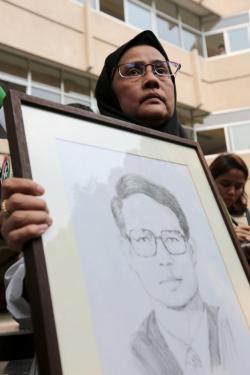 Human rights defender Angkhana Neelapaijit holds a picture of her husband Somchai Neelapaijit, who went missing on March 12, 2004, before she attended a seminar hosted by several agencies including Amnesty International Thailand and the Office of the UN High Commissioner for Human Rights for Southeast Asia at Thammasat University. Chanat katanyu

"The loophole is quite clear with Ms Angkhana's case where in 2013 the Criminal Court rejected accusations regarding the five police officers who were suspects in Mr Somchai's abduction. They also refused to allow family members to be co-plaintiffs in court," Mr Meillan said.

"The disappearance of Mr Somchai is not new to the country. The UN has documented 86 cases of forced disappearances and torture, and 82 of them are still pending investigations. This number reflects the importance for the government to revise laws concerning this matter," Mr Meillan added.

A professor from the Faculty of Law at Thammasat University, Ronnakorn Boonmee, said the government's stance on torture and forced disappearances lacks sincerity and commitment.

"We are still not part of the Declaration of All Persons from Enforced Disappearance [CED] and we have not fulfilled our commitments to the CAT [Convention Against Torture] in Geneva since 2014.

"Signing up to the CAT under the Surayud Chulanont administration was an act for the sake of the country's image," Mr Ronnakorn said.

Mr Somchai's daughter, Pratubjit Neelapaijit, spoke to the press before the seminar began and said: "He must not die for nothing ... Together, we can create a better justice system by making forced disappearances and torture very serious offences under Thai law.''