Gina Haspel, a veteran CIA clandestine officer picked by President Donald Trump on Tuesday to head the Central Intelligence Agency, is a controversial figure, backed by many in the US intelligence community but regarded warily by some in Congress for her involvement in the agency's black-site detention facilities.

Haspel ran a secret CIA detention facility in Thailand codenamed "Cat's Eye" but better known as Detention Site Green. Two suspected members of the al Qaeda militant group were subjected to waterboarding and other harsh interrogation techniques at the facility.

Three years later, still during Bush's presidency, she helped carry out an order to destroy videotapes of the waterboarding at the Thai site, which simulates drowning and is considered a form of torture, according to those people.

Such facilities are called "black sites" because their existence is unacknowledged by the US government.

Every Thai government and army commander since 2002 has denied there every was such a site on Thai territory - which is the point of the very existence of "black sites".

The exact location of the Cat's Eye site has remained secret despite hundreds of attempts by Thai and foreign media to discover its actual whereabouts. 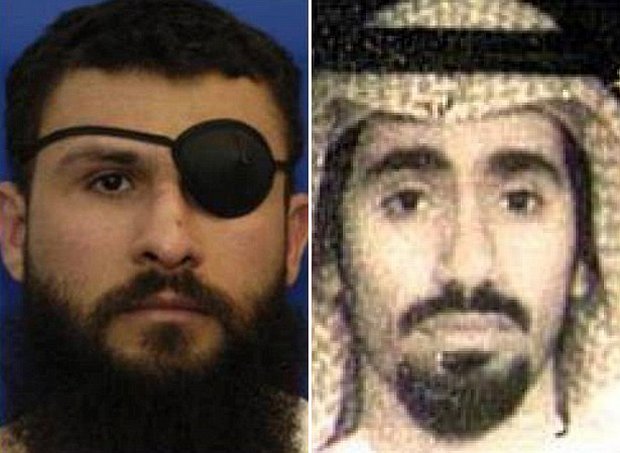 Waterboarded: The main focus of the Cat's Eye site and Gina Haspel in 2002 was trying to extract information from al-Qaeda terrorists Abu Zubayadah (left) and Abd al Rahim al-Nashiri.

Trump appointed Haspel to take over the CIA after he fired secretary of state Rex Tillerson and tapped CIA director Mike Pompeo to replace him as the top US diplomat.

"He will do a fantastic job! Thank you to Rex Tillerson for his service! Gina Haspel will become the new Director of the CIA, and the first woman so chosen. Congratulations to all!"

John Brennan, who ran the CIA for ex-president Barack Obama and has become a leading critic of President Trump, praised Trump for selecting Haspel.

Brennan in 2013 named her deputy director of National Clandestine Service, but she was denied a permanent promotion in the face of congressional opposition.

Haspel, 61, has extensive overseas experience and has served as chief of station on several postings.

She served in a number of undercover overseas posts in addition to her work in Thailand, including as chief of the CIA station in London and the agency's base in New York.

Rising through the ranks, she was picked last year to be deputy to CIA director Mike Pompeo, despite criticism of her history in "black sites".

At the time, Mr Pompeo described her as an "exemplary intelligence officer" with an "uncanny ability to get things done and to inspire those around her".

"This is going to reopen wounds from a decade and more ago, and also invite more oversight of both our analyses and our activities, especially if Gina is confirmed," said one US official, speaking on condition of anonymity.

"Haspel is a particularly controversial choice, given her reported past involvement in torture at CIA black sites. No one responsible for torture should be leading a federal agency, period," said Rob Berschinski, senior vice president of Human Rights First."The Senate should use her confirmation process to send a strong signal about where this country stands on correcting the mistakes of the past."

Edward Snowden, who stole millions of US intelligence documents and fled to Moscow, flayed the Haspel appointment.

"Interesting," tweeted Snowden. "The new CIA Director Haspel, who 'tortured some folks,' probably can't travel to the EU to meet other spy chiefs without facing arrest due to an @ECCHRBerlin complaint to Germany's federal prosecutor," wrote Snowden, referring to a complaint filed by the European Center for Constitutional and Human Rights.

Interesting: The new CIA Director Haspel, who "tortured some folks," probably can't travel to the EU to meet other spy chiefs without facing arrest due to an @ECCHRBerlin complaint to Germany's federal prosecutor. Details: https://t.co/7q4euQKtm7

Are these really the values the US should be promoting? The CIA might as well start issuing uniforms decorated with skulls and lightning bolts. https://t.co/ZIeHWP57l3