Deal struck with Malaysia to build border wall in Songkhla

Officials hope the border wall will help to stop drugs, terrorists and smugglers, and ease the pressure on security-conscious tourists centres like Sadao and Hat Yai, above. (Photo by Assawin Pakkawan)

Thailand and Malaysia have agreed to proceed with a plan to build a border wall in Songkhla in efforts to strengthen security operations and fight transnational crime.

The agreement was reached during the 54th meeting of the Thai-Malaysian General Border Committee (GBC) in Bangkok chaired by Defence Minister Prawit Wongsuwon and his Malaysian counterpart Dato Seri Hishammuddin Tun Hussein.

Speaking after the meeting, Gen Prawit said the proposed 11km border wall will be built at Dan Nok-Dan Sadao in Songkhla with details to be worked out later.

A source familiar with the plan said the 11km border wall has been on the agenda for both countries for some time but the project has been not been able to get off the ground because of a perceived lack of enthusiasm by Malaysia.

The border wall is expected to stem the flow of drugs, weapons, illegal petrol and human trafficking between the two countries. Thailand and Malaysia share a 640-kilometre common border.

According to Gen Prawit, the latest GBC meeting also touched on the issue of dual citizenship and a memorandum of understanding is expected to be signed on the citizenship issue soon.

Authorities are making preparations for the planned signing of the citizenship deal, he said.

He said the authorities still have to find out how many people hold dual citizenship but the move is needed to enhance security and surveillance in the restive South.

Dual citizenship is often regarded as a legal loophole allowing people suspected of carrying out attacks in the deep South to easily slip across the border into Malaysia to hide.

He said Thailand has also expressed a willingness to increase collaboration in information-sharing with Malaysia to tackle terrorist threats in the region.

However, the defence minister said he has informed Malaysian authorities that there are no Islamic State-related jihadi activities taking place in the country.

Gen Prawit said the talks did not touch on the issue of illegal Uighur migrants who have escaped and some who have claimed they were heading from Thailand to Turkey via Malaysia.

He was referring to the escape of migrants in November last year. About 20 broke out of an immigration detention centre in Songkhla's Sadao district and some were recaptured.

According to the Defence Ministry, the GBC meeting has approved a proposal to forge closer cooperation in the exchange of information to effectively combat transnational crimes.

Also on the agenda is a joint military exercise with a focus on natural disaster relief and humanitarian assistance.

It is proposed that Asean countries be invited to join the drill as participants or observers. 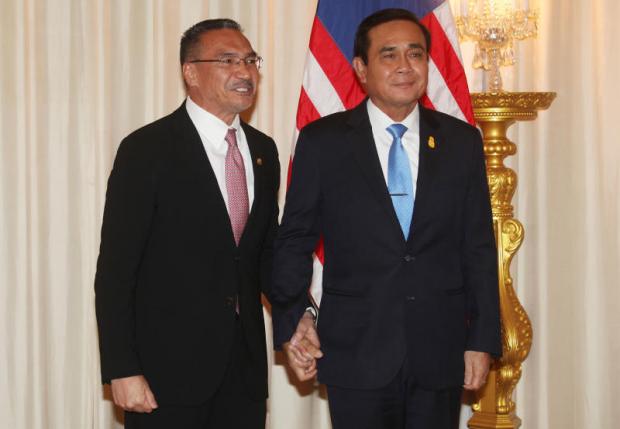