The rescued calf drinks from her mother's breast after a tense reunion on Thursday afternoon. The young animal was rescued after falling down a mountainside on the night of Feb 24 in Thung Tako district, Chumphon. (Photo by Amnart Thongdee)

CHUMPHON: A baby elephant rescued after falling down a mountainside in Thung Tako district has been reunited with her mother and accepted back into the herd, after three weeks apart.

The dramatic yet heartwarming reunion was witnessed by a team of delighted forestry officials, vets and volunteers.

The baby elephant, given the name Phang Boonmak, was seen happily drinking milk from its mother’s breast, surrounded by members of the herd after initial fears she may be rejected after so long apart. Tranquilizer darts were ready in case they attacked.

The calf was believed to be less than 10 days old when rescued, but still weighed a respectable 200 kilogrammes.

Phang Boonmak fell down a mountainside in Thung Tako late at night on Feb 24.

Ngao Waterfall National Park rangers and volunteers came to the rescue in the morning after hearing the herd making loud noises in the area overnight. They found and took the calf to an animal care unit for treatment.

On Thursday, the once-again healthy youngster was taken to a forested area in tambon Khao Khai of Sawi district, Chumphon. A team of forest rangers hazed the calf's mother and herd down from a mountain and into the area.

Phang Boonmak was waiting, alone inside a loosely made rope fence. Around 4.30pm seven wild elephants walked towards her. For the next hour there was a lot of trumpeting and rumbling, and the team members became anxious the reunion might fail.

The herd gradually calmed down and the baby was reunited with her mother. She drank milk from her mother’s breast for the first time since they were parted, and the team members sighed with relief and joy.

The herd drifted back into the forest. It normally roams in Lang Suan, Thung Tako and Sawi districts. 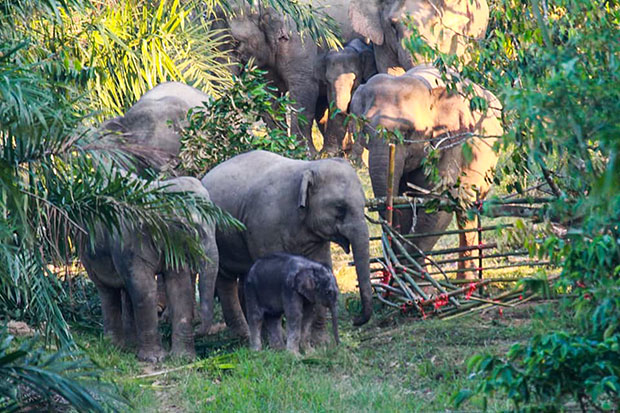 Phang Boonmak reunites with her wild mother and the herd in Chumphon on Thursday. (Photo by Amnart Thongdee) 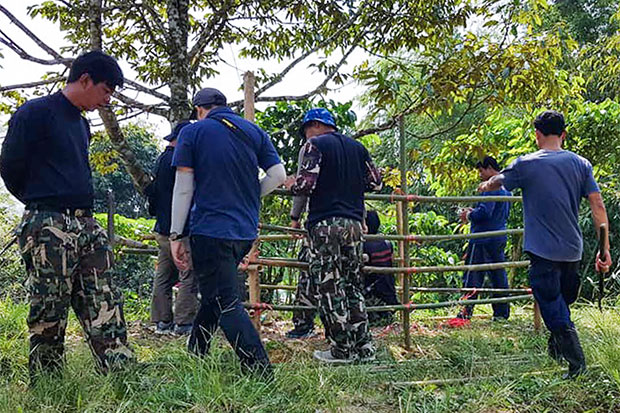 The team was armed with tranquiliser darts, just in case. (Photo by Amnart Thongdee) 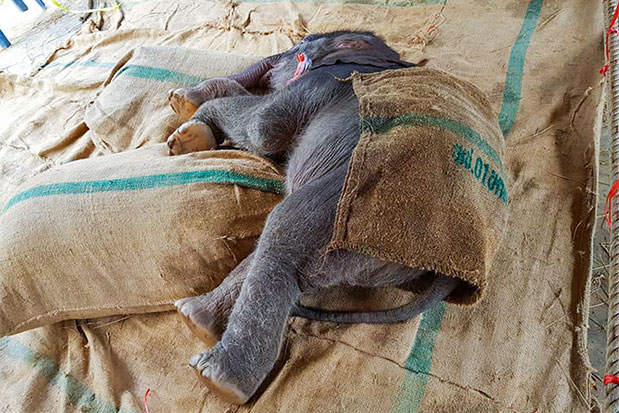 The calf  after her rescue from a mountainside in Chumphon on Feb 25. (Photo by Amnart Thongdee) 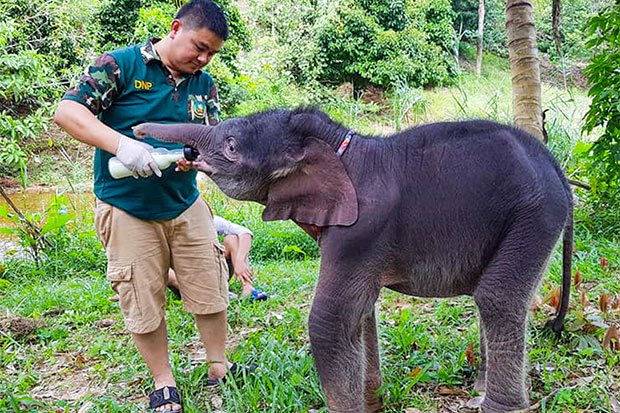 Separated from her mother, a youngster still has to feed. (Photo by Amnart Thongdee)