A major corruption scandal has erupted over the purchase of anti-rabies vaccine by this department of the Ministry of Agriculture and Cooperatives, under civilian technocrat Grisada Boonrach. Deputy Prime Minister and economy tsar Somkid Jatusripitak is responsible for the ministry. (Photo via Google Maps)

A vaccine procurement scandal that erupted amid the rabies outbreak has prompted the Agriculture and Cooperatives Ministry to set up a probe to look into alleged irregularities.

The panel will investigate claims that the Department of Livestock Development (DLD) purchased rabies vaccines from a single supplier for decades.

The issue was brought up Wednesday by the media as department director-general Apai Suttisunk addressed a press conference on the department's efforts to contain the rabies situation which has killed six people in the first three months of this year.

It involves a claim that the department bought vaccines from a single company for 25 years and the company in question is connected to the wife of a former DLD deputy director-general.

Critics also questioned whether the vaccines purchased by the department were substandard.

Mr Apai, who appeared reluctant to discuss the issue, said the company had not done business with the department since 2014.

He said the deputy director-general in question was transferred to another department last year.

Mr Apai said the Agriculture and Cooperatives Ministry has set up a fact-finding committee to investigate the scandal.

The department chief also insisted the rabies vaccine procurement process was transparent and the specifications were not rigged to favour any particular bidder.

The scandal is seen as another setback for the DLD which came under fire for its handling of the rabies vaccination programme of free-roaming dogs and cats after the spread of the virus in 24 provinces.

At a seminar on the rabies situation on Tuesday, Dr Thirawat Hemachutha, of Chulalongkorn University's faculty of medicine, cast doubts about the vaccination and sterilisation programmes.

"If we met the target set in the vaccination programme, why do we have this situation? If we had the animals sterilised, why did the number of strays increase?" he said.

Mr Apai said the department did not make up the figures, saying livestock authorities were working with local bodies to administer the vaccine to about 8.24 million stray dogs and cats. 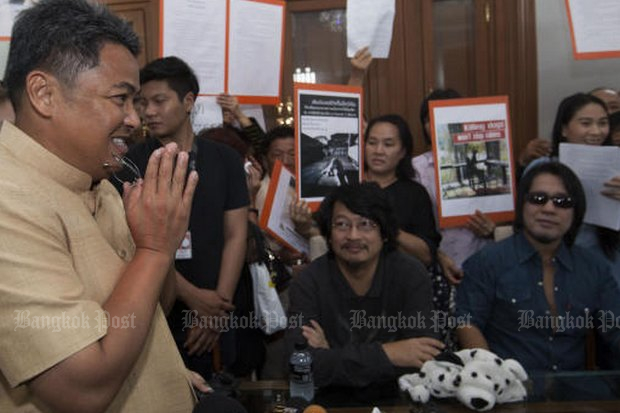 Director-general Apai Suttisunk of the Department of Livestock Development greets members of an alliance protesting what they called 'set zero' government policies to slaughter dogs in order to battle the spreading rabies threat. (Photo by Pawat Laopaisarntaksin)

Of this, the department procured 1 million doses of rabies vaccine annually, half for use and the other as stockpile, he said, adding that there were enough supplies of vaccine.

Of the target, 2.4 million dogs and cats were vaccinated, he said, adding the number covered those within the radius of five kilometres where infected animals were found.

By June this year, 80% of target animals will be vaccinated, he said.

At the seminar, Dr Thirawat called on relevant authorities to come clean about the figures shown to the public and to change the current approach to dealing with the spread.

Designating rabies-hit areas as green, yellow and red zones were misleading because it made people take the situation less seriously than they should do.

According to the DLD guidelines, the green zone indicates rabies has not been found in humans or animals for more than two years.

He also noted that the rabies situation in Thailand started to show worrisome signs in 2016 and intensified this year.

Lack of coordination between the Agriculture Ministry and the Public Health Ministry was in part to blame.

He suggested that the Public Health Ministry adopt the World Health Organisation's vaccine guidelines because they are more effective in infections.

Veterinarian Pornpitak Phanla, a livestock official, said the major cause of human fatalities is the failure to get treated after being bitten and most people are unaware that chances of survival are low after an infected individual shows symptoms.

Speaking after meeting with authorities from six provinces, he said City Hall has sufficient supplies to go around and for loans.

He assured that the BMA's rabies vaccines are standard and are procured from a supplier certified by the Food and Drug Administration.