KRABI: Two people, including a three-year-old boy, were killed and six others injured in a crash involving a tour bus and a pickup truck in Ao Luk district late Friday night.

The fatal crash occurred at Ao Luk Nua intersection where the pickup truck suddenly rammed into the tour bus, which was on the way to pick up tourists at Krabi airport at about 10pm on Friday.

The force of the crash caused the tour bus to hit roadside stalls. The engine of the bus then caught fire. The pickup truck rammed into a power pole and overturned, said police.

Fire trucks and firemen managed to put out the fire shortly later.

A boy, 3,  identified later as Thammanoon Phutthama, was killed and five others, including a baby girl, sustained injuries and were trapped inside the bus.

Pickup truck driver Viroj Kitkarn, 48, was found dead inside the vehicle and another man, identified later as Suriya Dindaeng, 50, was hurt. All victims were rushed to a nearby hospital.

A police investigation found that the tour bus, carrying six people, including the bus driver’s family members, left Phuket and was on the way to pick up tourists at the Krabi airport when it was hit by the pickup truck travelling in the opposite direction.

Police were investigating the cause of the crash. 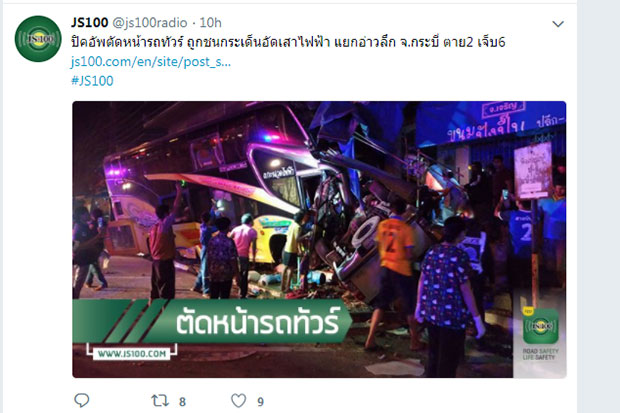 Rescue workers retrieve the bodies and the injured inside a tour bus and a pickup truck following a crash in Krabi's Ao Luk district late Friday night. (Photo taken from @js100radio twitter)