Thirty-six scuba divers and crew members rest on the 'Scuba Net' boat on Sunday after their own boat, the 'Choltara', caught fire and sank off the Andaman coast in Krabi. (Photo from @K5_Rescue Twitter account and Krabi's disaster prevention and mitigation office)

Thirty-six Thai divers and crew members were rescued after their boat caught fire late on Saturday night off Krabi.

At 12.10am Jor Sor 100 radio received a request for help saying 36 people were adrift on the Andaman Sea between the Lanta and Phi Phi islands after their boat caught fire. 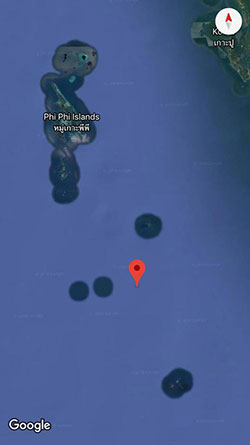 The Choltara was taking the divers, all Thai nationals, to Phuket after a scuba-diving expedition off the Andaman coast in Satun, Trang and Krabi, according to Jor Sor 100.

A caller to the radio station identified only as Kusol said the fire started in the engine room near the bottom of the boat and could not be controlled.

"I was resting on the top floor, since I was to return to Bangkok after arriving on the mainland," Jor Sor 100 quoted him as saying.

"A crew member smoke coming from below, and tried to put out the fire with an extinguisher, but the fire spread," said Mr Kusol, who also is a volunteer for the Por Tek Tung Foundation. "I alerted my friends and used my mobile phone, the only thing I had, to call for help."

All were rescued by another vessel in the area, the Scuba Net, at 12.50am and taken to Phuket, where they arrived four hours later, said the radio station.

It was unclear how many on the sunken boat were divers and boat operators.

Capt Chongcharoen Jaengjul of the Third Region of the Royal Thai Navy told Jor Sor 100 that all were wearing life-saving jackets when they had to abandon the ship before it sank.

Pol Lt Col Attapong Saenjaiwut, a tourist police officer in Krabi, said on Sunday the captain and crew of the Choltara had been taken to Koh Lanta police station in Krabi for interrogation.

The fire broke out in a location under the jurisdiction of Koh Lanta police.