Officials enter the twin townhouses of C8 education official Rojana Sinthi in Don Muang district on Friday. On Monday she was sacked from the civil service for corruption, losing all benefits. (Photo by Apichit Jinakul)

A senior Education Ministry official accused of embezzling at least 88 million baht from a fund to assist students from poor families was fired on Monday.

They agreed unanimously, by a vote of 7-0, to hit her with the harshest penalty, by sacking her from the bureaucracy.

The decision takes effect immediately and it means she will not be eligible for a pension or other benefits. 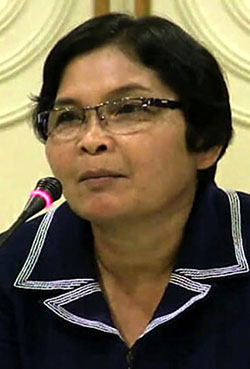 Ms Rojana is accused of stealing more than 88 million baht from the Sema Phattnana Chiwit Fund, channelling the money into her own pockets through 22 bank accounts in other people's names before it was transferred to her account.

The fund was set up to help poor girls get a better education and a better future.

She admitted wrongdoing but ministry officials and investigators are not convinced she acted alone given the scale of the corruption.

Their belief was backed up by what police, ministry officials and graft busters found during a search of her home on Friday - twin townhouses in Don Muang district.

Authorities said they found evidence relating to the fund in  her home and in her vehicles. Some of the evidence had been burned or was ready to be destroyed.

Investigators now believe more than 100 million baht could have been siphoned from the fund in total, and are digging deeper into the money trail.

Pol Lt Col Siripong Sritula, a former policeman and now a graft buster of the Public Sector Anti-Corruption Commission, said they hope to find out whether officials of higher rank than her were also involved in the fraud.

To date, she was not prepared to give more information, but she might if given more time, he added.