Fishermen long for justice as Thailand comes under UN scrutiny

SAMUT SAKHON: Sold to a boat operator for 6,000 baht two years ago, Win from Myanmar worked as a fisherman until he lost his forearm in an accident on the vessel this year.

Toiling for 19 hours a day, Win said the crew of 30 sometimes would not get any rest during peak season, with a United Nations team in Thailand this week to investigate such reports of abusive working conditions.

"Life is difficult as a fisherman in Myanmar so I thought it would make my life better if I come and work in Thailand," the father of four, 39, told the Thomson Reuters Foundation.

"The 'agent' did not tell me what work I was going to do or how much I would be paid. I just ended up working on the boat."

The world's third largest seafood exporter, Thailand's fishing industry employs more than 300,000 people, many of them migrant workers from neighbouring countries, and the sector has long been dogged by allegations of abuses.

The industry is under further international scrutiny this week as a team of United Nations experts undertake their first visit to examine human rights in a wide range of businesses in Thailand, including the fishing and seafood sectors. 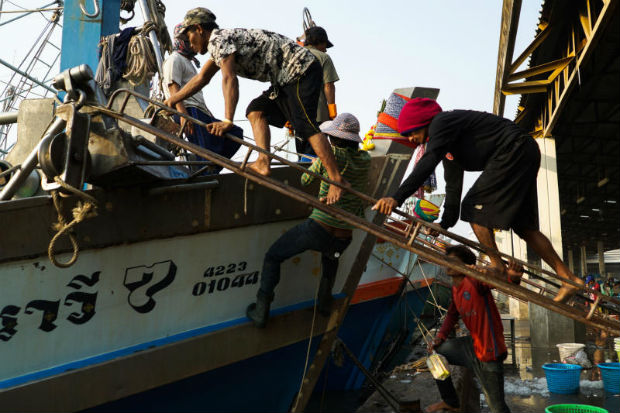 Speaking from Samut Sakhon, a major fishing hub one hour drive from the capital Bangkok, Win said he lost his left arm after it was caught in a wheel as he hoisted the net one day.

Unhappy with the offer of 10,000 baht compensation from his employer, Win is now appealing to the Thai authorities for a higher amount.

But even before the incident Win said he felt underpaid.

Starting at about 10,000 baht in the first month, the fisherman said his wages had gradually gone down to 4,000 baht. Thailand's legal monthly minimum wage is about 9,000 baht.

"Any slight mistakes we made, we would be scolded or beaten up. I was hit twice - one time with a machete to my head," said Win, who asked that his full name not be published as he fears it will affect his case with the Thai authorities.

Thailand's multi-billion-dollar seafood sector has come under scrutiny in recent years after investigations by the media and human rights groups showed slavery, trafficking and violence on fishing boats and at onshore processing facilities.

On Monday, Clovis @cloviscasali and I visited Mahachai to interview victims of human trafficking in fishing industry.

The military, which took power in a 2014 coup, has rolled out reforms since the European Union threatened in 2015 to ban fish imports from the country unless it cleaned up the industry.

But the ILO also found signs of continuing forced labour despite pressure from retailers to clean up the industry, including abusive working conditions and excessive overtime, especially among migrants from Cambodia and Myanmar.

More than a third of migrant fishermen in Thailand were victims of trafficking, according to a study of 260 fishermen by anti-trafficking group the International Justice Mission last year.

A spokesman from the UN Working Group on Business and Human Rights said the group would meet officials, activists and migrant workers during its 10-day mission to Thailand to ascertain whether the government measures have been effective.

"Business and human rights issues are becoming more and more prominent, including in Asia," Surya Deva from the working group, a law professor at the City University of Hong Kong, told the Thomson Reuters Foundation.

"Human rights abuses in supply chains, for example, are a very critical issue. Another area of global concern is the rights of migrant workers." 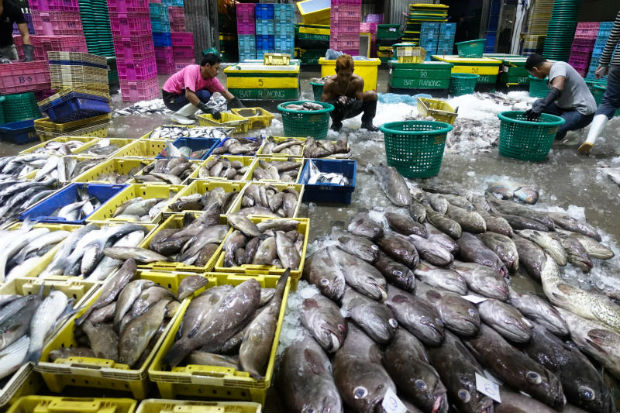 The group is expected to urge Thai authorities to adopt a national action plan on dealing with modern slavery and human trafficking in industries from seafood, to manufacturing and tourism at the end of their visit.

An estimated 425,500 people live in conditions of modern slavery in Thailand, according to the Global Slavery Index 2016 by campaign group Walk Free Foundation.

But activists urged the UN team to do more than just make recommendations.

Back in Samut Sakhon, boats were pulling into a port on a sunny morning and fishermen busy unloading their catch.

Local women and migrant workers from Myanmar quietly sorted sardines and mackerel according to their size before they were loaded onto trucks and sent to nearby processing plants.

But this is a scene that Win would like to forget. All he wants now is to get compensation for losing his arm and go home.

"I am not happy here. At least if I go home, I can be with my wife and children," he said.