With the project, the university aims for zero-carbon transport at the Rangsit Campus within five years. Thiti Wannamontha

Thammasat has teamed up with Star 8 Thailand Co to provide electric motorbikes for the SolaRyde project and serve the university's students, staff and visitors -- roughly 7,000 passengers per day.

Some 25 motorcycles are available in March and a further 25 will be added to the fleet in April.

Prinya Thaewanarumitkul, Thammasat's vice-rector for administration and sustainability, said the purpose of the project is to lower CO2 emissions at the campus and in the surrounding community.

"Through the SolaRyde project, the goal is to reduce the emissions by 500 metric tonnes annually and achieve zero-carbon transport at the campus within the next five years," Mr Prinya said.

The SolaRyde motorbike is equipped with a lithium-ion battery for 27 amp-hours and has a driving range of 60-70km.

The bike is designed for a charge time of four hours at the campus's station. Each SolaRyde motorbike costs 50,000-60,000 baht.

Under the collaboration, Solartron Plc provides solar-powered charging stations at the campus. Thammasat itself has a solar panel capacity of five megawatts for the purpose.

"TU aims to be a green university and a smart city in the near future, as it has a commitment to achieve the UN's Sustainable Development Goals for 2030 from renewable energy," Mr Prinya said.

Moreover, Bangkok Bank will provide QR code payment through the bank's mobile application. Passengers at first will pay just one baht per ride, while taxi drivers will receive 10 baht in cash back to accounts until June 1.

The normal ride fee starts at 10 baht, and passengers can pay by cash as well.

Natthapon Ukkaralawun, managing director of Star 8 Thailand, said the collaboration is meant to raise environmental awareness and generate a higher volume of electric vehicles in the country.

"The government should be more active in promoting electricity vehicles in the Thai market, and it should be a leader in supporting expansion of charging stations," Mr Natthapon said. 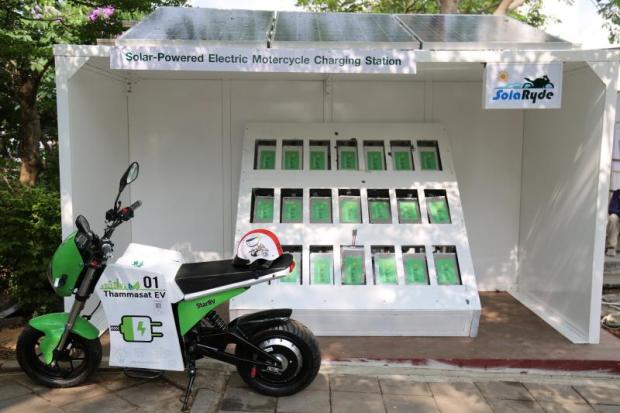 A charging station for electric motorcycles at Thammasat University.