Seasonal crop burning is the main cause of heavy haze that blankets Chiang Mai every year. (Bangkok Post File Photo)

The governor of Chiang Mai wants criminal charges laid against a local magazine for posting a "blasphemous" painting on Facebook showing ancient kings wearing pollution masks as part of a campaign to protest against hazardous smog.

The English-language magazine Citylife Chiang Mai posted the illustration by a local teenage artist to promote a rally urging authorities to tackle the toxic haze that plagues the northern province annually.

The painting shows masks on the statues of kings Mengrai, Ramkhamhaeng and Ngam Muang, a famous local landmark.

Governor Pawin Chamniprasart called the artwork a "blasphemous act" and assigned an official to file charges against the outlet under the Computer Crime Act.

The cyber-crime law, which carries up to five years in prison for uploading false content to the web, is routinely used against perceived critics of the monarchy on social media, though it is not as harsh as the lese majeste law that carries up to 15 years per offence.

"I assigned my official to file a complaint with police yesterday that the picture may have violated the Computer Crime Act as it's inappropriate," Mr Pawin told AFP on Saturday.

"The statues of three kings are very sacred and respected by Chiang Mai residents, they were our ancestors."

In an official letter to police, the governor said the painting "may affect Chiang Mai's image and its tourism, causing the city economic instability".

Chiang Mai is a major hub for travellers exploring the country's lush and mountainous North. But it also struggles with dangerous levels of air pollution during crop-burning season.

Police confirmed they were investigating the case, while the magazine announced that its "Right to Breathe" protest had been cancelled.

In a Facebook post, the teenage artist behind the painting said it was "a shame that people are hurt by a picture and not the polluted air that they are breathing in". 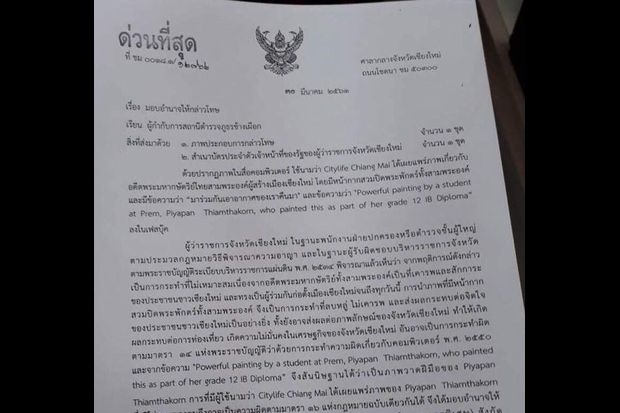 A copy of the letter signed by Chiang Mai governor Pawin Chamniprasart authorising an official to file a complaint with police against the Citylife Chiang Mai Facebook administrator for posting a picture of a painting. (Photo from Facebook/@CitylifeChiangMai)