Premchai off hook on five charges

The public prosecutor's decision to drop five charges against construction tycoon Premchai Karnasuta has been met with fierce criticism.

Social media has been flooded with angry questions after the Office of Public Prosecution Region 7 announced its decision Wednesday to drop almost half of the charges against Mr Premchai.

The president of Italian-Thai Development and three of his friends were arrested on Feb 4. They were charged with poaching in the Thungyai Nareusuan Wildlife Sanctuary, a Unesco World Heritage site, in Kanchanaburi province. 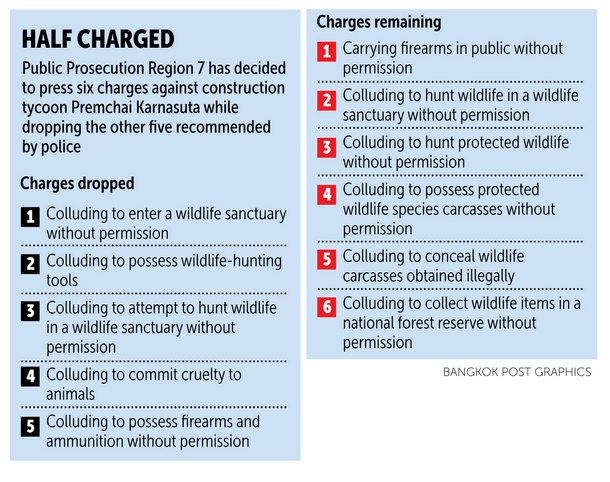 Mr Yong faces the same charges prosecutors resolved to press against Mr Premchai, plus an additional charge of colluding to possess firearms and ammunition without permission, Ms Somsri said.

Ms Nathee, who served as a cook during the poaching trip, faces almost all the charges recommended by the police, except for the one for colluding to hunt wildlife, Ms Somsri said.

Mr Thanee faces the same charges Mr Yong does, plus another charge for colluding to hunt wildlife, she said.

The indictment will also claim damages from all four totalling 462,000 baht, payable to the National Parks, Wildlife and Plant Conservation Department. 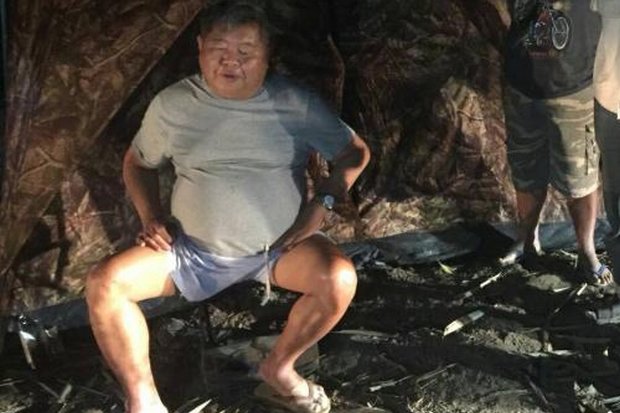 Premchai Karnasuta and three employees of his Italian-Thai Development conglomerate were arrested on Feb 4 in a restricted area of the Thungyai Naresuan sanctuary, in possession of animal carcasses and guns. (Photo courtesy DNP)

Financial compensation for the four defendants' alleged violation of the Environment Act will have to be pursued in a civil suit, Ms Somsri said.

"If Provincial Police Region 7 agrees with the charges, the case will be forwarded to Thong Pha Phum Provincial Court and the suspects will be arraigned. If not, the Office of the Attorney-General will make the call," Ms Somsri said. Prosecutors will draft the indictments while they await reaction from the police, she said.

Deputy police chief Srivara Ransibrahmanakul said police would send a letter to object to the decision.

"Police remain steadfast in our original decision [to press 11 charges]. However, we somehow accept the public prosecutor's decision to drop charges on colluding to commit cruelty to animals and colluding to possess firearms and ammunition without permission," Pol Gen Srivara said.

The Office of The Attorney-General Immediately came out to defend the Office of Public Prosecution Region 7's decision.

"Contrary to criticism in social media, public prosecutors did not drag their feet or try to delay the case. They worked swiftly, fairly, cautiously," Prayuth Phetchkhun, deputy spokesperson of Office of the Attorney-General told journalists.

"We are not surprised by the public prosecution's decision. Despite five charges being dropped, public prosecutors still press six charges relating to hunting protected wildlife," said Ornyupa Sangkama, chief of the academic section and an environmental law expert at Sueb Nakhasathien Foundation, a respected conservation group that closely monitored the case.

Social activist Tanat Thanakitamnuay, who spearheads a graffiti campaign for fair legal action against the poachers, said: "I believe that the recent development in Premchai's case is still fair and transparent."