A Chiang Rai-bound interprovincial bus comes to a halt at a roadside ditch after veering off the road in Ngao district, Lampang, early Friday morning. (Photo by Ngao rescue association via rescue news Facebook page)

LAMPANG: A bus staffer was killed and 12 people hurt when a Chiang Rai-bound interprovincial passenger bus veered off the road and fell into a ditch in Ngao district early Friday morning.

The Bangkok-Chiang Rai bus came to a halt in the ditch after hitting roadside trees on Ngao-Song Road in tambon Ban Phong of Lampang province when police and a rescue team arrived at the scene after being reported at around 5am, said Pol Capt Supachai kanthawong, deputy investigation chief at Ngao police station.

A woman was found dead in the front seat of the bus. Rescue workers retrieved her body from the wreckage. Twelve other people, including 11 passengers and the driver, were hurt and sent to Ngao Hospital. The remaining 21 passengers escaped unhurt, Thai media reported.

A police investigation found that the bus, carrying 32 passengers, left Mor Chit bus terminal at around 8pm on Thursday to head for Chiang Rai. When the bus reached the scene, it suddenly skidded off the road and plunged into the roadside ditch.

Police believed bus driver Monthian Naksawat, 57, who was among the injured, dozed off at the wheel on the long trip. They were investigating.

The bus operator, Sombat Tour Co, sent another bus to take the passengers to Chiang Rai on Friday morning. 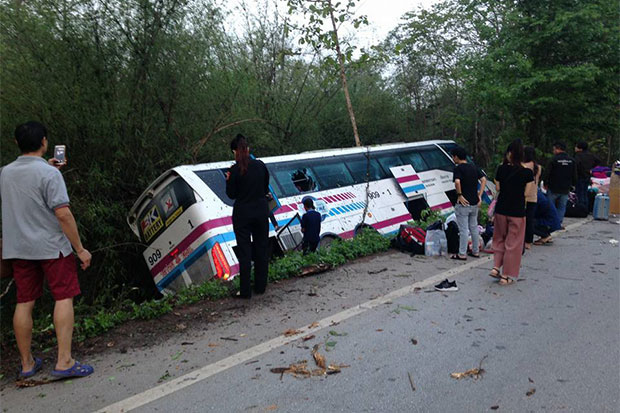