More than 100 houses in Ubon Ratana district, Khon Kaen, are left with no roofs as hailstorms and gusty winds hit several areas from Friday evening until Saturday morning. (Photo by Chakkrapan Natanri)

Several villages in Ubon Ratana district of this northeastern province were affected by hail, which left many houses with no roofs.

Injuries were reported as some houses collapsed after being struck by heavy storms, said the assistant district chief as he led local officials and soldiers to survey damage at five hail-hit villages.

The survey found hailstorms caused damage to 107 houses in the five villages.

The Meteorological Department said outbreaks of storms, thunder, gusty winds, hail and downpours were likely to hit the North, the lower Northeast, the Central regions, including Bangkok and its vicinity, and the East today.

In its weather warning issued on Saturday morning, the department warned residents in upper Thailand to keep off unsecured buildings and outdoor areas.

During April 7-9, the strong easterly winds across the Gulf of Thailand with more rain and isolated downpours are expected in the South. Wind waves in the Gulf and the Andaman become strong with 2-3 metres high, said the department.

All ships are advised to proceed with caution, and small boats in the Guld keep ashore. 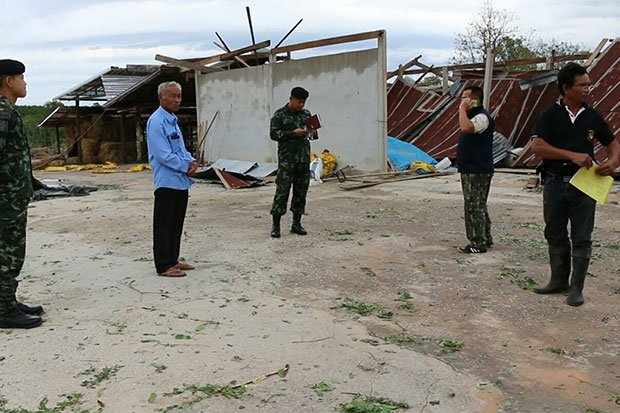