SAMUT PRAKAN: A tour bus driver has been arrested and charged with stealing money from five Chinese tourists who left their bags inside the vehicle at a car park in Bang Sua Thong district while having a meal at a nearby restaurant.

The tourists had left them on the parked bus when they went to eat at a nearby restaurant on Soi Lat Krabang 45 in Bang Sao Thong district on Wednesday afternoon, police said.

After finishing their meal, some passengers wanted to buy fruit to eat on the journey. They returned to the bus to get the money from from their bags, which were left on their seats.

Upon getting back on the bus they saw Mr Thanayot going through passengers' bags. They immediately alerted a tour guide and their compatriots. 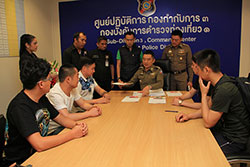 Five Chinese men make statements to tourist police after their bus driver was caught stealing money from their bags. (Photo by Sutthiwit Chayutworakan)

Five Chinese men told the guide that money was missing from their bags, totalling 5,800 yuan in all (about 28,905 baht or US$921). The guide then called Bang Sua Thong police.

A police search found the stolen money was in the bus driver’s pocket. The suspect was taken to tourist police sub-division 3 at nearby Suvarnabhumi airport for further interrogation.

Mr Thanayot admitted taking the money, but claimed it was the first time, according to police. He said he was addicted to crystal methamphetamine.

He noticed that Chinese tourists often left their hand luggage on the bus when they got off to have a meal. He took this opportunity to steal money while pretending to clean the bus.

He was unlucky. Some tourists returned to the bus and saw him doing it.