A shop in a market in Chiang Mai shows the hand of the seller with a green ribbon and a sign reading "This shop does not sell things for people committing sin by destroying the forest. We love our Doi Suthep." (Photo from @DoiSuthepMountain Facebook account)

Campaigners against the construction of a court housing project at the foot of Doi Suthep in Chiang Mai are using social media to increase pressure for the return of the forest.

The Network for the Return of Doi Suthep Forest used its @DoiSuthepMountain Facebook account on Sunday to urge residents in Chiang Mai to step up their opposition to the scheme.

"If you believe in the the social power of Chiang Mai people, you can do it," a Facebook message reads.

The page shows pictures of people joining the social campaign by posting a sign opposing the project or displaying a green ribbon, a symbol of their fight to see the housing project scrapped and the forest returned to its pristine condition.

Civic groups and the government are locked in a dispute over the project, which is constructing housing for the Region 5 Court of Appeal office on land plots owned by the Treasury Department in Mae Rim district of the northern city

The court building itself has not aroused the ire of people in Chiang Mai. They object to 13 flats for staff and 45 houses built higher on the foothills of the mountain for judges and senior officials.

Following the criticism, the government finally agreed not to use the residential buildings for their original purpose.

But the fate of the residential buildings is still under dispute between the locals and authorities.

The campaigners insist on the complete -- or almost complete -- demolition of the buildings and placing the disputed plots in an environmental protection zone.

A panel set up by the government, however, is reluctant to flatten the project, which is almost finished. It favours using the buildings for other purposes.

The land was once controlled by the Royal Thai Army, which returned it to the department for the court project. 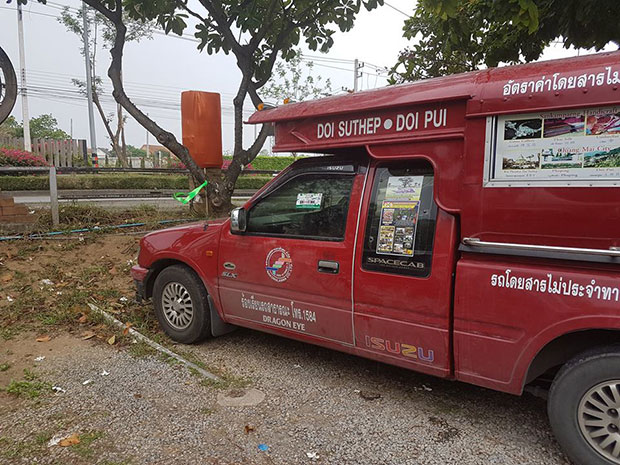 A red song thaew, a trademark of public transport in Chiang Mai city, is seen with a green ribbon as part of the campaign against a housing project on Doi Suthep. (Photo from @DoiSuthepMountain Facebook account)