Small protests and a 'bicycle ride-in' at the court's existing headquarters have taken place, but civil society has announced it intends to step up its campaign to demand the demolition of the Doi Suthep project. (Photos FB/DoiSuthepMountain)

CHIANG MAI: A civic network will this Sunday intensify its protest against the state housing project at the foot of Doi Suthep in an attempt to prompt Prime Minister Prayut Chan-o-cha to make the "right" decision and return the area to nature.

Gen Prayut must heed the voice of the people, who disagree with the land development in a forest area on the scenic mountain in this northern province, Theerasak Roopsuwan, who co-leads the protest, said Monday.

The correct solution in the protesters' eyes is the demolition of buildings, including a new courthouse and 45 residences, now being built for judicial officials of the Region 5 Court of Appeal Office on a plot of land covering 127 rai.

Because the area has been declared as a degraded forest and belongs to the Treasury Department, state officials say the project does not violate any laws. 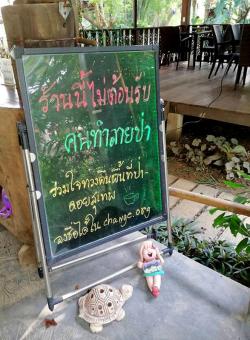 However, their opponents, who are looking at the issue from an environmental point of view, see no benefit to the construction, part of which is on mountain slopes which could make the buildings prone to natural disasters.

Environmental group, the Seub Nakhasathien Foundation, also views the buildings as an eyesore, and has warned the government this project will mar its efforts to restore Thailand's dwindling forests.

"We want people in Chiang Mai and nearby provinces to show up in force on April 29," said Bannarot Buakhli, another key protest leader.

Sunday was picked because his network expects a solution, as discussed at last week's meeting between a state-civic committee and the Chiang Mai governor, will have been forwarded to the prime minister by then.

Gen Prayut is expected to make a decision on the fate of the project early next month.

The meeting agreed to restore the area and find a new location for judicial officials, but could not settle on whether the buildings should be demolished.

Mr Bannarot said if the network does not hear good news from the prime minister, the group will mobilise more supporters and turn its fight into a "war".

People have been asked to back a campaign on Change.org, while vendors in Chiang Mai's Warorot local market and outside Muang district put up green signs and placards saying they will not sell goods to those who destroy the forest.

Nikom Putta, chairman of the Chiang Mai-based Upper Ping River Watershed Conservation Programme, said he believes Gen Prayut will not order officials to knock down the buildings. However, he suggested, people should not be allowed to occupy and make use of the area.

The leading environmental activist, who vowed to stage a hunger strike in protest, made a comment after Chamnan Rawiwannaphong, former president of the Region 5 Court of Appeal Office, reportedly suggested judicial officials be allowed to live and work in the area for 10 years while restoring the environment.

SONGKHLA: You can find almost anything at a pawn shop — from gold necklaces to a ladder — when the coronavirus hits people's purses.