CHIANG RAI: The chief of the Hmong Club in Thailand and his family were ambushed Tuesday. The attackers killed his wife and daughter, while the ethnic leader and his son were gravely wounded.

Local authorities were informed of the incident at about 5pm Tuesday.

Police responding to the emergency found a silver Toyota pickup truck registered in Chiang Rai with licence plate number Phor Khor 4115. There were numerous bullet holes through the windshield, both sides and the rear of the pickup.

The driver was identified as Thaweesak Yodmaneebanphot, 54, kamnan of tambon Por and chairman of the Hmong Club in Thailand.

The wife and daughter were both killed at the scene. Mr Thaweesak and his son, severely wounded, were rushed to a local hospital.

The ambush took place on a curve of the road that passes through a forested mountainous terrain. Police believe the family were on its way home.

No motive for the attack has been determined, but police said they were investigating a possible business conflict. 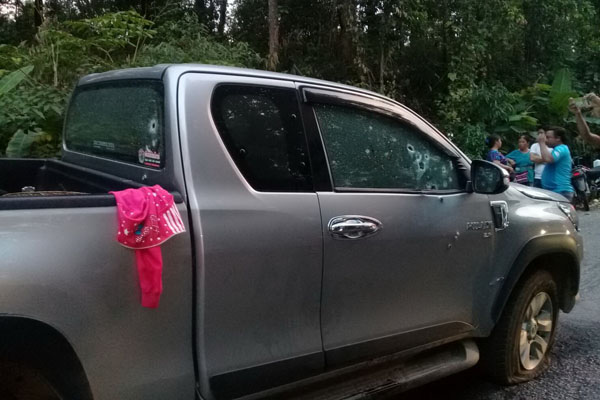 Bullet holes are on the right side and the back of the cab.