Thunderstorms continued to ravage provinces in the North and the Northeast on Thursday as the Meteorological Department warned the storm front will move over most of upper Thailand, including Bangkok, today and into Saturday.

Soldiers and officials from Nan provincial disaster prevention and mitigation office were sent to survey the damage on Thursday morning.

In Phichit, a storm brought gusty winds to Dong Charoen district on Wednesday evening, ripping the roofs off 12 houses.

Soldiers were sent to repair the damaged houses in two villages of tambon Huai Ruam on Thursday morning.

The Meteorological Department said on Thursday that the high pressure system from China extended into the upper Northeast of Thailand. From April 26-27 it will move over upper Thailand where it will meet rising hot air, generating storms, as a westerly trough is also moving through the North.

Thunderstorms with gusty winds and hail are forecast in the North, the Northeast, the Central area including Bangkok, the East and parts of the South on April 26-28, the weather office warned on Thursday morning.

People were again advised to keep away from large trees, billboards and unsecured structures during a storm.

The Disaster Prevention and Mitigation Department said summer storms had hit 45 districts in 20 provinces across the country from April 23-25, affecting 1,042 households in 136 villages.

Department chief Chayapol Thitisak said on Thursday that the storms hit eight provinces in the North and 12 in the Northeast during April 23-25. Most lost their roof. 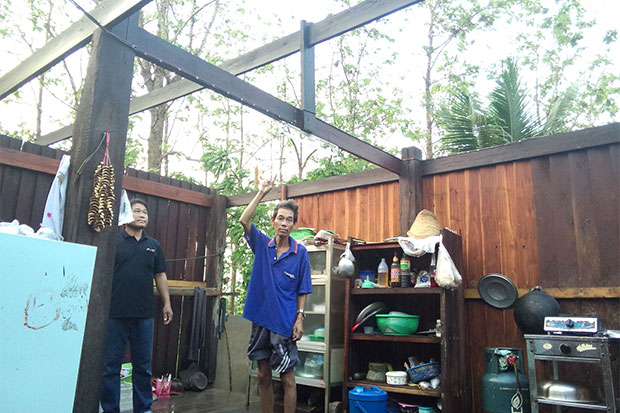 This house in Wiang Sai district of northern Nan province was left without a roof after being hit by a summer storm. (Photo by Rarinthorn Petcharoen) 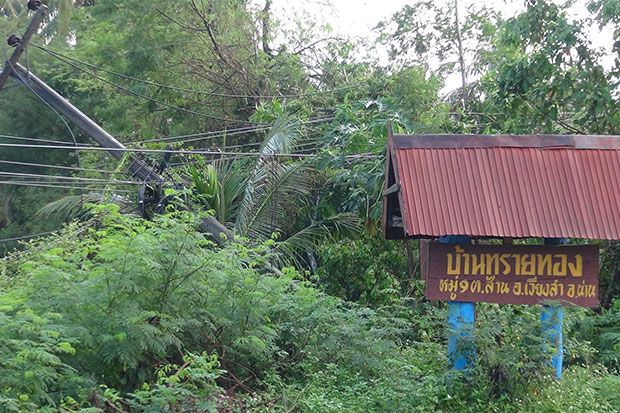 Five power poles and several big trees were brought down in Sai Thong vilage, of Nan province, by a storm and gusty winds. (Photo by Rarinthorn Petcharoen)