Rescue workers examine the body of Thanakorn Seechart after it was taken to a local hospital following an incident (inset) near a checkpoint in Samut Prakan on Wednesday evening. (Photo by Sutthiwit Chayutworakan)

SAMUT PRAKAN: Three senior police officers have been transferred after a man died of injuries sustained when a police volunteer kicked over his motorcycle near a checkpoint. The volunteer was arrested and charged.

Thanakorn Seechart, 26, struck his head and died later in hospital after falling off his bike during the incident on Wednesday evening on Soi Mit Udom (Sukhumvit 74) in tambon Samrong Nua of Muang district.

Video of the incident involving police volunteer Thanatpol Tangpipat, 39, was posted on Facebook and drew an outraged response from many viewers. 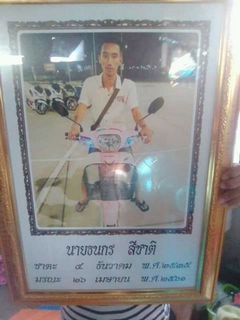 A picture of Thanakorn Seechart is displayed at his funeral service.

The incident occurred after police from the Samrong Nua station and volunteers set up a drug checkpoint on the soi.

Pol Col Decho Sowusannakul, chief of the Samrong Nua station, said on Thursday that officers manning the checkpoint noticed that Thanakorn was not wearing a helmet and his bike had no licence plate. When they signalled him to stop, he made a U-turn. Officers then shouted at others to help stop the bike.

Mr Thanatpol, who was standing at the entrance of the soi, kicked Thanakorn, causing him and his girlfriend to fall from the bike. Police found no illegal items on the pair.

Pol Col Decho said officers called a rescue team to take the motorcyclist and his passenger to Paolo Memorial Samut Prakan Hospital. The hospital informed the station that Thanakorn died at 5am on Thursday, he said.

Thanakorn sustained head injuries and a broken left arm and severe bruises to his body. Natthaya Khramsamrong, 22, who was riding pillion, was injured.

Mr Thanatpol was summoned for questioning on Friday at the station and charged with recklessness causing death. He was later taken to Samut Prakan provincial court for detention.