The Office of the National Water Resources (ONWR) is seeking a 150-billion-baht budget to fund 13 major water management projects over five years starting later this year, the office's secretary-general said on Friday. 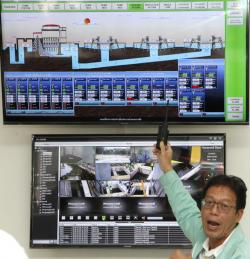 An official briefs a team, led by deputy Bangkok governor Chakkaphan Phewngam, during a visit yesterday to a drainage tunnel under the Klong Bang Sue canal. It is designed to drain excess water from Klong Lat Phrao into the Chao Phraya River. Pornprom Satrabhaya

Speaking after a meeting of the government's sub-committee on water resource management strategies chaired by Deputy Prime Minister Chatchai Sarikulya, Somkiat Prajamwong, the ONWR secretary-general, said the office will soon submit details of the projects to the cabinet.

The 13 projects are two water tunnel construction projects in Bangkok, 10 water management projects under the care of the Royal Irrigation Department, and a project to construct a new reservoir in Chanthaburi province in the Eastern Economic Corridor.

The Chanthaburi reservoir will have a capacity of more than 60 million cubic metres and is now in the process of undergoing an environmental impact assessment (EIA), said Mr Somkiat.

The budget for this project alone is estimated to be between 2 billion and 3 billion baht, he said.

The budget to fund all these projects, described by Mr Somkiat as "large and important", will be sought as additional budget, while those projects that may be large but aren't seen as high priority will be funded by the usual budget, he said.

All the 13 projects will definitely pass the EIA and environmental health impact assessment (EHIA) before their implementation, he said.

They are sustainable growth in the green economy, the development of agricultural communities, eco-industry, water security and environmentally friendly agricultural energy, he said.

Gen Chatchai said opinions on the strategy will be sought from members of the public and academics.

SONGKHLA: Two motorcyclists, one of them a woman GrabBike taxi driver, were killed in two separate accidents in Hat Yai district in the small hours on Sunday, police said.

A large majority of people agree with the Bangkok Metropolitan Administration (BMA)'s designation of seven protest sites - some with confidence that the city administration would be able to effectively keep protesters in designated areas, according to the result of an opinion survey by the National Institute of Development Administration, or Nida Poll.