Premchai to be indicted on six charges, three dropped

RATCHABURI: Prosecutors say they will indict Premchai Karnasuta on six charges in the poaching case on Monday and throw out a police request to add three more against the construction mogul.

Somsri Wattanapaisal, chief of the Office of the Public Prosecution Region 7, announced the decision on Monday after the Office of the Attorney General (OAG) endorsed it. The regional prosecution office, located in Ratchaburi province, has jurisdiction over Kanchanaburi, where the incident took place.

Mr Premchai and three others will be indicted in the Thong Pha Phum Provincial Court in Kanchanaburi province by Monday, she added.

The OAG agreed on the six charges against the Italian-Thai Development president and rejected a push by police to add three more accusations against him, she said.

Prosecutors also demand financial compensation of 3 million baht from Mr Premchai and three other accomplices in the poaching case.

The other three suspects -- Yong Dodkhruea, Nathee Riamsaen and Thanee Thummat -- will be indicted on several accounts relating to the alleged poaching in the Thungyai Naresuan Wildlife Sanctuary in Thong Pha Phum district in Kanchanaburi in February.

All were arrested on Feb 4 by rangers in the sanctuary with the carcasses of a black leopard, a Jlij pheasant and a barking deer. Park authorities also found three long-barrelled guns and ammunition in their possession. 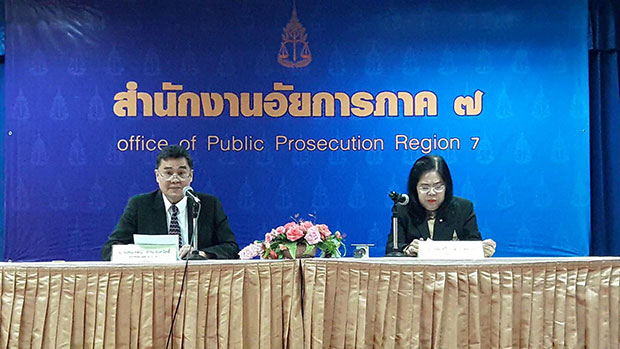 Somsri Wattanapaisal (right), director-general of the Office of the Public Prosecution Region 7, announces the decision to indict Premchai Karnasuta and three other suspects at the office in Ratchaburi province on Monday. (Photo by Saichol Ochakajon)